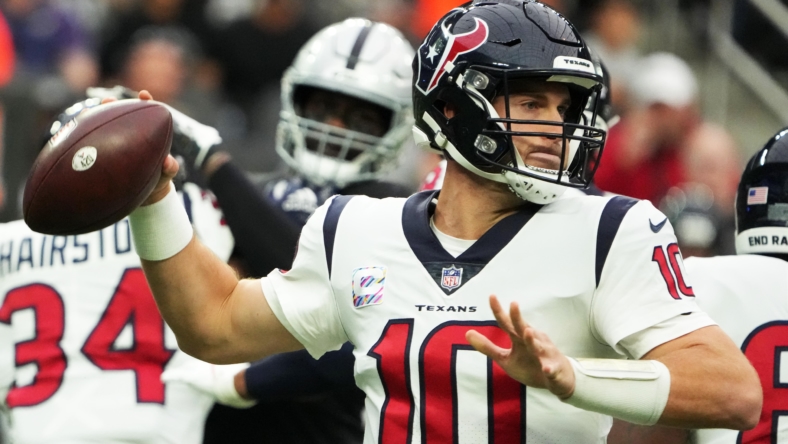 Davis Mills and his Houston Texans are going nowhere fast as a team this season. They head into Thursday night’s game against the undefeated Philadelphia Eagles with a 1-5-1 record.

Houston has won all of nine games since the start of the 2020 season, which totals just five more than the number of head coaches the team has had during that span.

Moving forward on the campaign, it’s more about the micro for Mills. The 2021 third-round pick from Stanford entered his sophomore campaign as a potential franchise guy. Nothing we’ve seen from him through eight weeks suggests that this is going to be the case moving forward.

Mills, 24, has thrown for less than 200 yards three times in seven starts this season. He’s thrown one touchdown or less all but twice during that span.

Sure a lot of this has to do with the Texans’ lack of talent on offense. But there’s a whole lot more that goes into the Texans’ brass evaluating whether Mills has a future as their starter. This willl likely be the top storyline in Houston throughout the final 10 games of the season. Here’s why Mills’ audition to be the guy begins in earnest Thursday night against a vastly superior Eagles team.

By virtue of their trade of Deshaun Watson to the Cleveland Browns last offseason, the Texans will have at least two first-round picks. Based on the current order, said selections would come in at No. 2 and No. 9 overall. Houston will also have a pick at the top of the second round as well as two third-round selections.

A total of three quarterbacks in that of C.J. Stroud, Bryce Young and Will Levis could go in the top-10 of the 2023 NFL Draft. Other first-round options include Heisman candidate Hendon Hooker and Anthony Richardson out of Florida.

Even if Houston opts to use its original first-round pick at another position, it has more than enough ammo to move back up for whoever is remaining out of Stroud, Young and Levis. While Mills’ performance moving forward this season might not play the largest role in Houston’s decision-making process, it could make said decision that much more difficult.

The firing of vice president Jack Easterby back in October was a move the Texans needed to make. But it could potentially change the dynamics for the long-downtrodden organization moving forward. That is to say, changing up the entire front office hierarchy.

Some might think that general manager Nick Caserio’s job is safe. After all, he was brought in back in January of 2021 from the New England Patriots afer the entire Bill O’Brien fiasco. With that said, it’s all about on-field success. Under Caserio, the Texans have posted a 5-18-1 record. How long will the McNairs stand for this?

If a move is made in this regard, a new general manager then wouldn’t have a built-in relationship with Mills. We’ve seen how that has worked out for other teams in the past.

This is the overriding point. Mills’ regression as a sophomore from his rookie campaign has been telling. Ahead of the 2022 season, the Texans’ brass was singing its praise in the direction of the former mid-round pick. Even as recent as early October, head coach Lovie Smith gave him a vote of confidence.

Smith on Davis Mills as the Texans’ starter moving forward

The numbers tell us a different story. Mills is on pace for five more interceptions than his rookie season. His completion percentage, quarterback rating, yards per attempt and yards per completion are all down from 2021.

We don’t expect a Year 2 quarterback to play like an All-Pro. But we do expect improvement regradless of the talent level surrounding him. That has not been the case for Mills thus far this season.