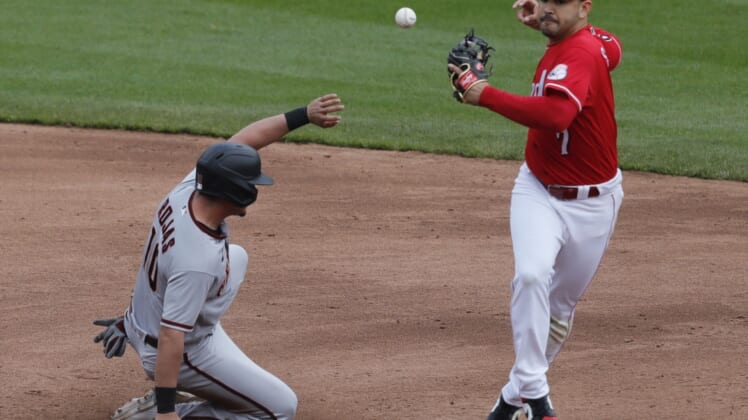 David Peralta went 5-for-6 with a home run and a career-high seven RBIs as the visiting Arizona Diamondbacks claimed a 14-11, 10-inning victory over the Cincinnati Reds on Thursday, closing out a three-game sweep.

Arizona extended its winning streak to four games when Asdrubal Cabrera opened the 10th on second base and scored on Josh Rojas’ single up the middle off Lucas Sims (0-1). Five batters later, Peralta delivered a bases-clearing triple off Cionel Perez and Carson Kelly added an insurance run with a solo homer.

Cincinnati scored three runs in the bottom of the 10th but lost its fourth straight despite blasting six home runs, including two by Jesse Winker, who drove in three runs and is 11-for-32 during his seven-game hitting streak.

The Reds took an early lead in the first on Winker’s leadoff homer off Taylor Widener, a 403-foot blast to left field.

Arizona responded with two runs in the third off Jeff Hoffman, who allowed two runs (one earned) over five innings.

Peralta pushed the Diamondbacks’ lead to 4-1 in the sixth with a two-run homer off Carson Fulmer before the Reds pulled even in the bottom half of the inning.

Peralta recorded the third five-hit game of his career and fell just a double short of the cycle.

Castellanos homered off Widener to begin the sixth before Votto singled and scored on Suarez’s 441-foot blast. Castellanos went 2-for-6 with three RBIs in his return from a two-game suspension.

Widener gave up four runs with seven strikeouts over 5 1/3 innings and was followed by seven relievers, including Caleb Smith (1-1).

The Diamondbacks pulled ahead 8-4 in the seventh after sending 10 batters to the plate and scoring four runs on two hits and five walks.

Cincinnati cut the deficit to 8-7 in the bottom half of the frame on Winker’s two-run blast and Votto’s solo homer.

India tied the contest in the eighth inning with his first career homer, a 388-foot shot to right field off Yoan Lopez.