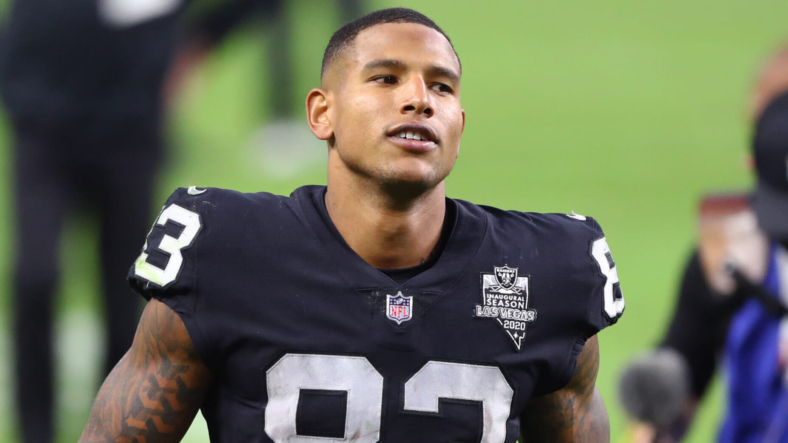 Seven years ago, Darren Waller entered the NFL as the 204th pick in the 2015 NFL Draft, hoping he could someday develop into a capable wide receiver. Unfortunately, he suffered a hamstring injury that wiped out his entire rookie season. He then battled substance abuse issues, causing a four-game suspension in 2016, before violating the NFL’s substance abuse policy once again, and getting a full-year suspension.

Four years would go by from the time he was drafted until he became the known force that the NFL has come to enjoy today. Waller broke out in a big way in 2019 with the Raiders, though now he was playing tight end full-time. The then-27-year-old racked up 90 receptions for 1,145 yards and three touchdowns while starting all 16 games for the first time in his career. Finally, Waller had arrived.

Now, five years after joining the Raiders, the organization is rewarding Waller’s hard work with a massive payday. According to Ian Rapoport, Waller is signing a three-year, $51 million extension. Waller still had two more years on his contract, but this not only gives him a nice pay raise but it also locks in their Pro Bowl tight end through the 2026 season, keeping the Derek Carr, Davante Adams, and Hunter Renfrow band together a bit longer.

Waller had been playing out the final two years of a four-year, $29.8 million contract that started in 2020. This contract adds on to the back end of his existing deal. So Waller will continue to make an average of $7.45 million this season and the next. But in 2024, the new extension he signed today kicks in.

For now, Waller ranks as the sixth-highest paid tight end in football. Yet, if we were to go off his new deal alone, at an average of $17 million per season, he’d easily be the top earner at his position, surpassing George Kittle’s $15 million per year average. Of course, once 2024 rolls around, several other tight ends will have signed new contracts too, pushing Waller’s earnings down the list of highest-paid players among tight ends. Still, it’s hard to imagine Waller caring about such titles, as his path to stardom didn’t come easily.

Waller has amassed 3,184 yards across six NFL seasons, but 94.4% of that yardage total has come in the past three years with the Raiders. Now, he’s ready to see if he can get another 1,000-yard year under his belt after coming up short due to injury last season. With Davante Adams now likely being their leading receiver, it won’t be an easy task, but Waller should face more one-on-one opportunities thanks to the Raiders having so many offensive weapons.

Expect Waller to have a big season, and now that neither he nor the Raiders are thinking about contract amounts, they can focus on their Sunday matchup with the Los Angeles Chargers.