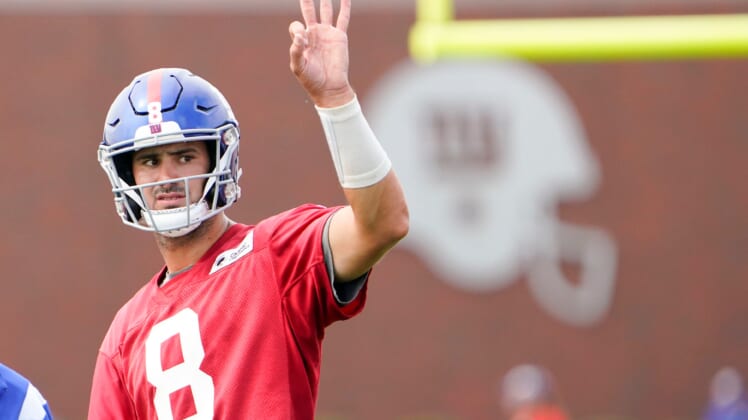 While most of the attention surrounding the New York Giants practice on Monday was centered around the brawl between center Jon Feliciano and linebacker Cam Brown, the real news is that once again Daniel Jones had a rough practice.

Jones completed just five out of 15 passes and was intercepted twice during the morning practice. The most concerning part is that a majority of his passes lacked velocity leading some to question if he’s fully recovered from his neck injury that caused him to miss the final six games of last season.

Sometimes things can get overblown in training camp as players try to get acclimated to playing football again.

But the fact that Jones has been inconsistent the entire summer has to be a concern to head coach Brian Daboll.

Tyrod Taylor gets first-team reps for first time this summer

For the first time in all of training camp, Tyrod Taylor took a rep with the first team offense and completed a pass to Kadarius Toney. Then, Daboll put Jones back in on the next play.

Maybe Daboll did this to light a fire under the 25-year-old Jones, or maybe he just wanted to give Taylor a quick rep as he’s been impressive throughout training camp. It will be interesting to see if Taylor gets any reps with the first-team offense on Tuesday which is their last practice before they travel to Foxborough to play the Patriots Thursday night.

The Giants believe they’ve made significant upgrades to the roster this offseason which will help change the franchise’s fortunes. But if Jones is still inaccurate and turnover-prone, then New York is headed for another double-digit loss season.