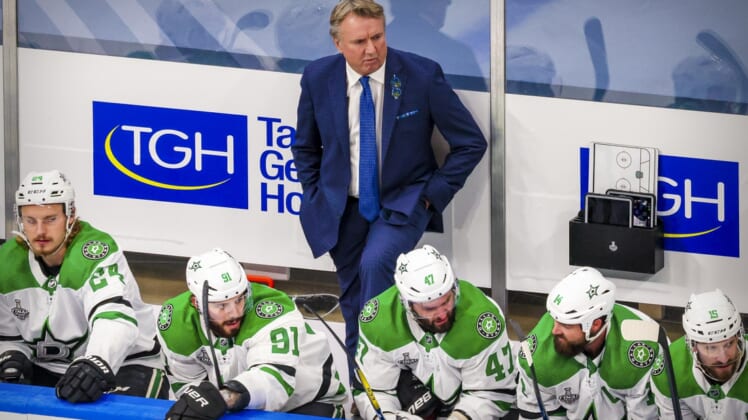 Sep 21, 2020; Edmonton, Alberta, CAN; A view of Dallas Stars head coach Rick Bowness during the third period between the Tampa Bay Lightning and the Dallas Stars in game two of the 2020 Stanley Cup Final at Rogers Place. Mandatory Credit: Sergei Belski-USA TODAY Sports

Dallas Stars coach Rick Bowness was pulled after two periods of Sunday’s 1-0 loss to the host Carolina Hurricanes due to COVID-19 protocols.

General manager Jim Nill said the 66-year-old Bowness had a positive test result come back during the second-period intermission. The Stars were in contact with the NHL office and it was decided that Bowness should be removed as a precaution.

Bowness, the oldest coach in the NHL, is fully vaccinated so Nill suspects the test will turn out to be a false positive.

“He was a very low grade, but it is still positive,” Nill said. “Out of safety concerns, he was pulled. But yes, he has been vaccinated. His first vaccination was back sometime in January. He’s had both vaccinations.”

“It’s like water off a duck’s back,” Stevens told reporters. “It is what it is. We’ll deal with it. Next man up, and we’ve had great contributions from next men up this year. I think the group deserves a lot of credit. I think we put ourselves right back in the fight. I think adversity is something that we’ve come to expect every day and we know how to deal with it.”

Dallas does have one player on the NHL’s COVID-19 list in goaltender Anton Khudobin, who was placed on it Saturday. Nill also feels Khudobin’s case involves a false positive.

“He came back negative, so same situation,” Nill said. “He was a real weak positive test and went through his two protocols and he had two negatives and he is now cleared to travel with the team.”

The Stars play road games at Chicago on Tuesday and Thursday.

The 34-year-old Khudobin previously revealed that he battled COVID-19 during the offseason.

Prior to the season, Dallas had an outbreak in which 17 players tested positive. That delayed the team’s season as the Stars’ first four games were postponed and they finally opened the slate against the Nashville Predators on Jan. 22.