Dallas Mavericks interested in Russell Westbrook? ‘Hell no’ according to NBA insider 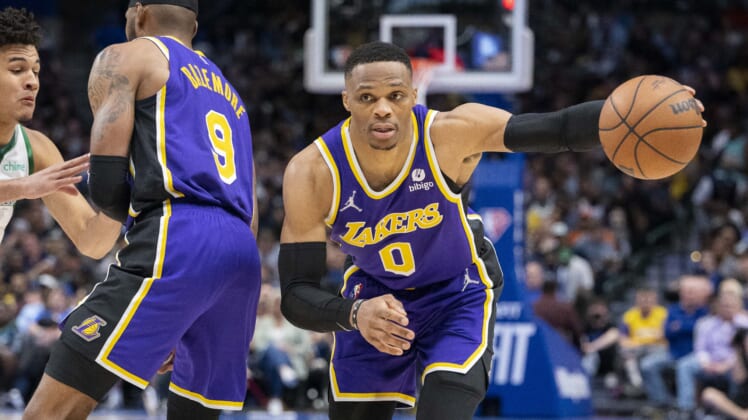 The NBA always has a few players who are seen as nearly untradeable. Only in this case, we’re not talking about players with incredibly high value, we’re looking at those whose contracts are seen as so unfavorable that their on-floor production doesn’t match their salary. Russell Westbrook is one of those.

With the former superstar and surefire future Hall of Famer set to earn $47 million in his age-34 season and already shown to be a poor fit with the Los Angeles Lakers, his trade value is at an all-time low. But that won’t stop the Lakers from trying to trade the embattled star.

As is, the Lakers have to basically sweeten the deal if they’re looking to trade Russell Westbrook, which means including additional assets to any outgoing offer. For example, in the Kyrie Irving trade discussions, the word is the Brooklyn Nets would want at least two first round picks to take on Westbrook’s contract.

The biggest complicating factor to any Westbrook deal is how the NBA’s trade rules are constructed, which require salaries to match within 125% of each other unless a team is under the salary cap, which few ever are. Teams don’t have multiple players they’re looking to unload only to add Westbrook, and if they do have some bad contracts, well, the Lakers don’t want those either. With just one year left on his contract, waiting one more year for the cap relief might be their best and only option.

Despite him being a nine-time All-Star, it seems Westbrook’s best days are behind him, but most importantly, teams just can’t justify his current salary, even if they could add a couple of future assets such as draft picks as well. So far, there’s been no team that’s coveting Westbrook in a major way. And it doesn’t appear that will change any time soon.

Dallas Mavericks a non-fit for Westbrook

Although they did lose Jalen Brunson to the New York Knicks, you can cross the Dallas Mavericks off the list of potential Russell Westbrook trade suitors too.

Credit to Tim MacMahon of ESPN, a longtime Mavs insider who stuck his neck out to ask around about Westbrook ending up in Dallas in any capacity this offseason, even if he were bought out. MacMahon’s sources gave a stern but clear answer for this past Friday’s episode of the ‘Brian Windhorst & The Hoop Collective‘ podcast.

Understandably, while many are hesitant to trade for his expensive contract, the fact is if Westbrook were to hit free agency as John Wall did this offseason, he’d likely find no shortage of suitors immediately interested in adding the point guard to their rotation.

But MacMahon wants us to know, that even if he became a free agent, there’s no chance of Westbrook landing with the Mavericks, which makes sense as he mentions the two ball-dominant guards would be a bad fit next to one another.

It sounds like the Lakers and Westbrook will have to keep looking if they both decide a divorce is best this offseason. The only question is, will it be by trade or from a buyout? The Lakers would likely rather try and make things work first.