Well, if you’re a Los Angeles Lakers fan hoping that the rumored deal sending Russell Westbrook to the Indiana Pacers does happen, you may want to get used to the idea that “Westbrick” is likely going nowhere.

Simply put, the trio of superstars Lebron James, Anthony Davis, and Westbrook was a disaster last year. While injuries to Davis and James were key factors in the team’s terrible season, as they missed the play-in tournament, Westbrook’s play was also influential. Even when the three were together they did not impress, and the former league MVP seemed like a shell of himself as he put up some of the worst numbers of his career.

Former head coach Frank Vogel has been the public fall guy for the team’s season and Westbrook’s disappointing play, but there is still some doubt if the Lakers really want the star guard back. He has been on the trade market throughout the offseason and recent reports claim James has “no interest” in playing with him next season. Unfortunately, his $47 million salary in 2022-2023 makes him nearly untradable.

Yet, there seemed to be a ray of hope in the last few weeks with rumors of a possible deal that would see the 33-year-old head to Indiana and the Lakers get center Myles Turner and Buddy Hield — a player they have been after for years.

Well, bad news LA fans, that trade looks to be DOA based on a Friday report from The Athletic’s Bob Kravitz.

Giving up first-round picks seems to be the only way the Lakers will be able to get Westbrook out of town. But the team has been very hesitant to lose those assets and they should be. Since they have limited first-round picks already over the next few years. 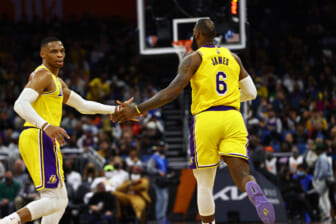 Also Read:
LeBron James has ‘no interest’ in playing 2022-’23 season with Russell Westbrook

With just one season left on his deal, the Lakers may need to just lie in the bed they made and hope new head coach Darvin Ham can get more out of Westbrook than Vogel could. That, or pray the Brooklyn Nets get another reason to want Kyrie Irving gone ASAP and revive talks of a swap of the two players.