LeBron James pushed the Los Angeles Lakers to make the Russell Westbrook trade during the 2021 offseason, opting for the All-Star point guard over acquiring Buddy Hield. A year later, the Lakers’ star seems more than ready to move on from Westbrook.

The Lakers’ attempt at a new “Big Three” failed miserably this past season. Los Angeles finished 33-49, 11th in the Western Conference and far out of the NBA playoff picture. As a disappointing season drew to a close, Westbrook made it clear he wasn’t really to blame for what happened.

During the NBA Summer League, Westbrook sat in a different section of the stadium than his Lakers’ co-stars. While a possible reunion seemed possible after reports of a call between the three NBA stars, that might not be the case.

On ESPN’s The Lowe Post podcast, NBA insider Dave Mcmenamin discussed the current situation in Los Angeles. He mentioned the Lakers have shopped Westbrook for over a month, exploring every single scenario where they could dump him. Despite LeBron meeting with his co-stars, the future Hall of Famer is reportedly still done with Westbrook.

It’s clear the Lakers want to get rid of Westbrook, but that is proving to be an even greater challenge than they feared. The Brooklyn nets won’t even contemplate trading Kyrie Irving for Westbrook and first-round picks unless Durant commits to staying with the new core. 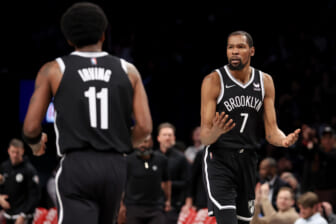 While the Utah Jazz, Indiana Pacers and Charlotte Hornets stand out as other possibilities, any deal would cost Los Angeles at least one of its future first-round picks and the return would be minimal. At a time when the franchise really wants LeBron to sign a contract extension, though, getting rid of Westbrook by any means necessary might eventually be required.

For the time being, it appears the Lakers’ stars will try and make things look better publicly. Behind the scenes, though, things are playing out much differently.