The Dallas Cowboys and Tampa Bay Buccaneers will do battle in the final game of the NFC Wild Card Playoffs Monday night on ESPN and ABC. The game will kickoff from Raymond James Stadium in Tampa at 8:15 PM ET.

It’s a rarity in the NFL Playoffs. Tom Brady and his Buccaneers get to host this game despite posting an 8-9 regular-season record. At 12-5 during the regular year, Dallas must travel to the not-so-friendly confines of Tampa. This is because the Bucs won their division while Mike McCarthy’s squad finished second in the NFC East behind the Philadelphia Eagles.

The matchup itself is rather interesting in that it pits a Cowboys team that has struggled big time in the postseason over the past quarter-century against a quarterback in Brady who has won seven Super Bowl titles throughout his career. Below, we provide you with four bold predictions for the Cowboys and Buccaneers during NFL Wild Card Weekend.

During their 17-game regular-season slate, the Cowboys put up north of 100 rushing yards all but six times. That includes going for north of 200 yards twice. In all, Kellen Moore’s offense finished ninth in the NFL in rushing with Tony Pollard leading the charge.

As for the Buccaneers’ defense, they finished in the middle of the pack stopping the run at just under 121 yards per game. Opposing running backs averaged a robust 4.5 yards per rush. This seems to be a plus-level matchup for Pollard and Ezekiel Elliott.

That’s until we realize that Tampa’s defense will look to force Dak Prescott to beat it through the air. Dallas’ quarterback has been a mistake waiting to happen with 11 interceptions over the course of his past seven regular-season outings. Expect Tampa to stack the box in this one, hoping that the Cowboys relying on Prescott will result in game-changing mistakes on the part of the quarterback. It’s happened multiple times recently.

Mike Evans turns back the clock for the Tampa Bay Buccaneers

Over the course of an 11-game span from Week 5 to Week 16, Evans caught a total of zero touchdown passes. He hauled in a mere 54% of his targets and averaged 7.3 yards per target. For the record-breaking receiver, this was the worst long-term performance of his heralded career.

Evans then returned to form Week 17 against a pretty good Panthers defense by catching 10-of-12 targets for 207 yards and three touchdowns before sitting out the regular-season finale.

We’re expecting the future Hall of Fame receiver to take advantage of Trevon Diggs’ gambling ways in Dallas’ secondary. While Diggs is one of the best ball hawks in the entire league, he gives up huge plays on a consistent basis. Last season saw the Pro Bowler yield a league-high 907 yards when targeted. Opposing quarterbacks threw for nearly 700 yards against Diggs during the 2022 regular season. You can do the math from here.

Despite earning yet another playoff appearance, the 45-year-old Brady regressed big time during the 2022 regular season. In fact, Brady threw a whopping seven interceptions in his final six starts ater tossing two picks over the course of the Bucs first 11 games.

That has to be of concern going up against a ball-hawking Cowboys secondary led by the aforementioned Diggs. Despite the cornerback’s propensity to give up the big play, he’s recorded 17 interceptions in just 45 career games. That included leading the league in picks with 11 during the 2021 campaign. 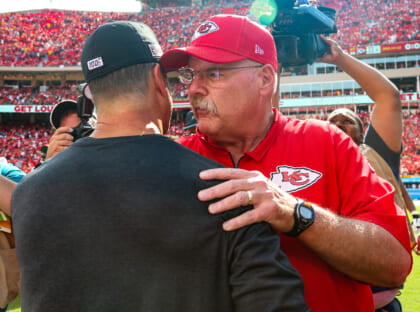 We’re going to boldly predict that Brady throws a game-changing pick-six into the hands of Diggs with everything on the line in the second half. Simply put, this season’s iteration of Brady has been nothing compared to what we’ve seen in the past. He’s made similar mistakes recently, and we expect Diggs to take full advantage.

Dallas’ playoff failures are by now already known. Owner Jerry Jones discussed them recently. Since winning the Super Bowl after the 1995 season, these Cowboys have posted a 4-11 playoff record. They have not made it past the divisional round during that span.

On the other hand, Brady has won seven Super Bowl titles. He’s the most successful playoff quarterback in NFL history.

So, why would we go with the Cowboys here? It’s rather simple. They were a better team during the regular season. Dallas won 12 games. Tampa Bay finished under .500. Dallas boasted the league’s fourth-best scoring offense. Tampa ranked 25th. Recency bias should take hold here.