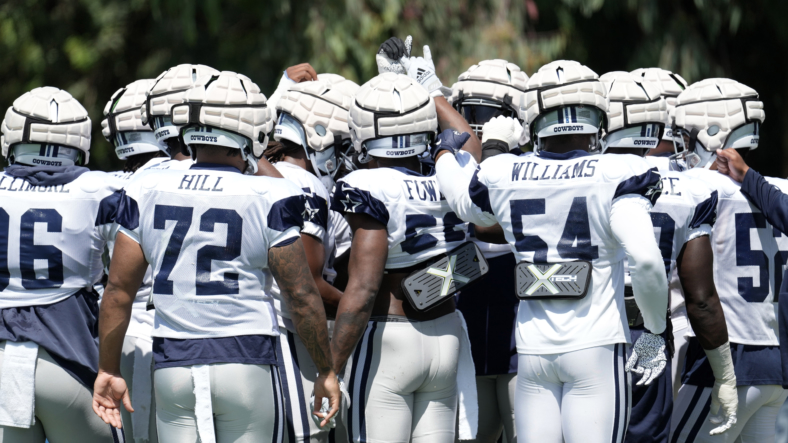 The Dallas Cowboys defeated the Seattle Seahawks 27-26 in the final game of the preseason. The game answered many questions about who should be a part of America’s Team this season. A few borderline players also made their way onto the team by standing out against the Seahawks.

The cut season is here. It is already being reported that quarterback Ben DiNucci and wide receiver T.J Vasher have already been notified of their releases. With Tuesday being the deadline for teams around the NFL to cut their rosters down to 53 players, here is the projected roster for the Cowboys on defense and special teams.

One of the biggest questions heading into training camp surrounded a replacement for Randy Gregory. The Cowboys were close to signing a deal with their former player. At the 11th hour, a deal fell through. Gregory ultimately landed with the Denver Broncos.

Dallas did bring back Dorance Armstrong, who had a career season in 2021 en route to collecting five sacks. He also had a great training camp, and the front office hopes he can develop as their next young pass rusher. Behind Lawrence and Armstrong is more veteran talent.

Dante Fowler Jr. played for defensive coordinator Dan Quinn in Atlanta. Tarell Basham is carried over from last season. Basham was not a lock to make the roster, but he balled out in the joint training camp practices and did not dress for the final preseason game. That usually means a player is making the 53-man roster. The Cowboys can do some roster maneuvering where either player is a veteran release and is brought back once James Washington or Tyron Smith go on injured reserve.

Sam Williams rounds out the group as their second-round draft pick this year. Williams has been penalized often during this preseason stretch. But against the Seahawks, he showed the team why he was worthy of being drafted highly. He should be used this year as a situational pass rusher.

Osa Odighizuwa has been treated as a veteran this preseason. He did not suit up for the final two games, which the team usually does for players like Dak Prescott and Ezekiel Elliott. It shows how much of an impression the second-year defensive tackle has made on the coaching staff. Neville Gallimore was injured during the preseason last year and returned toward the end of 2021. It was great to see him get out of training camp healthy, and he should be a starter from day one.

Trysten Hill was not considered a likely candidate to make the roster this season. Fans have wanted to cut him since the team drafted him in 2019. Entering the final year of his contract, it looks like Hill has something to prove. The former UCF star had a great game against the Los Angeles Chargers, collecting a sack, fumble, and recovery in the same play. He also played great games against the Broncos and the Seahawks. Unless the team uses him for trade bait, the expectation is he should be on the roster.

The final two spots are between Quinton Bohanna, Chauncey Golston and John Ridgeway. Bohanna has been great as a run defender in the preseason, and looks like he will be taking a step forward in year two. Golston was asked to put on weight and transition to defensive tackle in the off-season. Coming out of the draft in 2021, he was graded as an outstanding run defender and leader. With his flexibility to play outside and inside, the Dallas Cowboys will be forced to cut John Ridgeway. He is a player victim of the numbers game but will be a high priority to be brought back to the practice squad.

Related: Find out where the Dallas Cowboys rank among NFL defenses

After playing out his rookie contract, Leighton Vander Esch was brought back on a one-year deal. The former first-round pick has been a shell of his former self since his All-Pro rookie season. Vander Esch played in 17 games last season, proving he could stay healthy. That’s about it. Anthony Barr was signed deep into training camp and spent most of his time rehabbing and conditioning for the season. If he can put it all together mixed with Parsons and Barr, this unit has the chance to be exceptional in 2022.

With Parsons splitting time as a rusher and a linebacker, the Dallas Cowboys hope Jabril Cox can fill that role. Coming off of a season-ending ACL surgery, the former LSU Tiger has flashed at times in the preseason. He should be in a rotation to start the season as he gets comfortable testing his knee.

The final spot goes to Devin Harper, who the team drafted out of Oklahoma State. He might not see much action on the field as a linebacker, but Harper will be playing a lot on special teams. The final linebacker spot usually goes to Luke Gifford, but the front office loves to develop the guys they draft. It would be best if Gifford could be brought back on the practice squad as an emergency player.

The secondary has been the Achilles heel for the Dallas Cowboys over the previous several seasons. Last year seemed to buck the trend. Trevon Diggs is coming off a First-Team All-Pro performance, leading the league with 11 interceptions. Anthony Brown and Jourdan Lewis both had career seasons in Quinn’s system. Barring any setback with Lewis’ injury, the three should be your starting outside and slot corners on opening night against the Tampa Bay Buccaneers.

The team was hoping for second-year cornerbacks Kelvin Joseph and Nahshon Wright to step up during training camp. While Wright has shown up in practice, his game film tells a different story. Joseph still looks like he is learning the game’s speed and dealing with off-the-field issues. For their shortcomings, the coaching staff will focus on their development and keep both on the roster as corners five and six.

What about cornerback number four? That would be Daron Bland out of Fresno State. The rookie has played like a pro in every game this preseason. It does not seem like there has been much of an NFL learning curve. He has excellent instincts and will most likely be the backup slot corner. Bland’s play is very reminiscent of Anthony Brown’s rookie year. It helps that Bland is wearing Brown’s old No. 30.

Dallas finally has consistency at the safety position — a spot they have been trying to fill with playmakers since Darren Woodson. Jayron Kearse became a new player under Dan Quinn in 2021. He was signed to a one-year deal last off-season with special teams ace written all over him. Now, the coaches have created this hybrid linebacker/safety position for him.

That means Malik Hooker should be the starting free safety and Donovan Wilson as the strong. Hooker has been talked up by owner Jerry Jones this off-season and looks to have a break-out year after staying healthy most of last season. Wilson is entering the final year of his contract, and his presence as a thumper is well documented. He is a liability in coverage, but Kearse should pick up the slack.

Markquese Bell and Israel Mukuamu have used the preseason games to their advantage. While most of their time on the field will be on special teams, both players have shown flashes of sure tackling and picking off passes. This is the one position Dallas Cowboys fans should feel comfortable with depth-wise in an emergency. A sentence I never thought would be written about this position.

Bryan Anger is coming off of a Pro Bowl and All-Pro season. He was always a lock to make the roster after the Cowboys signed him to a contract in the off-season. Jake McQuaide is special teams coach John Fassel’s guy. McQuaide followed Fassel over from the Los Angeles Rams and remains consistent as a long snapper.

The kicking position was a battle for most of the training camp. The winner didn’t join the roster until more than halfway through. Brett Maher is the only kicker left after the team cut Jonathan Garibay before preseason games and released Lirim Hajrullahu last week. This is not Maher’s first season with the team. He beat out former All-Pro Dan Bailey in 2018 for the job and was released 13 games into the 2019 campaign.

Maher did play on the New Orleans Saints in 2021 and was 16-of-18 on field goal attempts with a perfect 4-of-4 mark on kicks 20-29 yards and 40-49 yards. He is known for his strong leg, which is why he beat out Hajrullahu for the job. Hopefully, he can have a rebound year with the Cowboys as he did in limited action with the Saints.

Cornerback C.J Goodwin has been a special teams ace for a few seasons but is a liability at cornerback. The coaching staff will likely rely on players like Nahshon Wright and Israel Mukuamu to fill the void. They could bring him back on the practice squad, but other teams could use his services outside of the Dallas Cowboys.