The Dallas Cowboys have seen their lead in the NFC East shrink and they’re battling COVID-19 issues.

The New Orleans Saints are sliding down the NFC wild-card standings and they’re battling a bunch of injuries.

The short-handed and struggling teams will meet Thursday night in New Orleans.

The Cowboys (7-4), whose 3 1/2-game lead in the division has shrunk to two games after a 1-3 stretch, won’t have head coach Mike McCarthy on the sideline after he tested positive for COVID.

Defensive coordinator and former Atlanta Falcons head coach Dan Quinn will be the interim head coach, although McCarthy is participating virtually in meetings and game preparations. 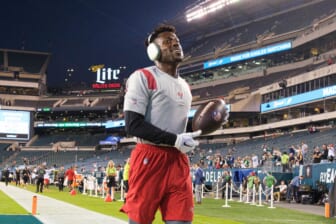 The status of wide receiver Amari Cooper, who is unvaccinated and missed the last two games after testing positive, was activated but his status remained uncertain. Meanwhile, fellow receiver CeeDee Lamb is expected to return after a one-game absence caused by a concussion. Dallas also expects the return of defensive end DeMarcus Lawrence, who has been sidelined since sustaining a fractured foot before the season’s second game.

“We know what we’re capable of,” Cowboys quarterback Dak Prescott said. “We know the team we have. The most important thing is just our belief in each other. That’s not going anywhere. It’s not fading.”

Dallas has rushed for fewer than 100 yards in four of the last five games and it averaged just 3.2 yards per carry against the Raiders.

“We’ve obviously been very successful running the football in the first part of the season, so people are gearing up for it,” McCarthy said. “We need to stay on top of our self-scout because I think just like anything at this point in the year people are locked into your formations and your run tendencies and when we run and how we run.”

New Orleans (5-6) is considering starting Taysom Hill at quarterback in hopes of a spark that might end a four-game losing streak.

The last time the Saints won a game was Oct. 31, the day when Jameis Winston sustained a season-ending knee injury against Tampa Bay.

Trevor Siemian has started in Winston’s place while Hill was recovering from a concussion and a foot injury, the latter of which isn’t fully healed although Hill practiced fully on Tuesday.

Armstead and fellow tackle Ryan Ramczyk aren’t expected to play because of knee injuries. Running back Alvin Kamara practiced on a limited basis after missing the last three games because of a knee ailment but also will reported miss Thursday’s game.

The Saints have won four consecutive NFC South titles, but their chances of catching first-place Tampa Bay are fading.

“We all get into sudden death once you hit Jan. 5,” Armstead said. “It doesn’t really matter where you play or who you play.

“We’ve been a number one or two seed and exited in the first round, but we’ve also been to the NFC championship, Super Bowl, and all of those good things. We just have to make sure we’re ready for the tournament though, not just sneak in or have some teams lose to let us get in, none of that. We have to put ourselves where we belong.”