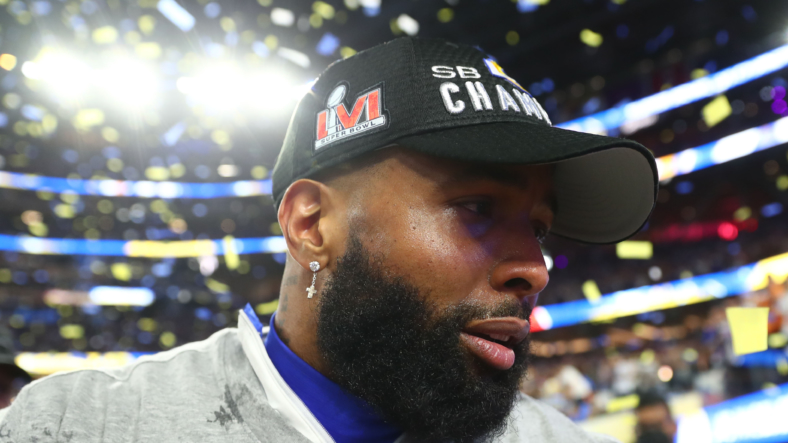 The Dallas Cowboys continue to be linked to star free-agent wide receiver Odell Beckham Jr. on a near never-ending basis.

Dallas is among the teams in on the three-time Pro Bowler and is scheduled to visit with him after Thanksgiving. It is joined by OBJ’s former New York Giants team as the top suitors with the Buffalo Bills and San Francisco 49ers lagging somewhat behind.

In a rare act of a team recruiting a free agent on social media, the Cowboys took to Twitter to tell Beckham Jr. that he’s wanted. “It’s your move, OBJ,” the team tweeted.

Meanwhile, star Cowboys quarterback Dak Prescott made it clear that he would love to see Beckham Jr. join America’s Team.

“When we’re playing like [how we did in Minnesota] and you’re able to add a talent like Odell, that can be special. That just creates more weapons for not only me, but for the offense [as a whole] and for the play-caller. It’s more things for the defense to worry about. We’re getting him in [for a visit] and hopefully things are going great in the recruiting process.”

Prescott went on to note that “he knows hoe much I want him here.”

This seems to be a clear indication that Dallas views itself as a favorite to land OBJ. The team wouldn’t be recruiting him so openly if the tea leaves weren’t blowing in this direction.

Odell Beckham Jr. as a fit for the Dallas Cowboys

Even after last week’s blowout 40-3 win over the Minnesota Vikings, it’s clear that the Cowboys are missing the production they got from Amari Cooper over the past few seasons. While CeeDee Lamb continues to do his thing, there’s been some struggles behind him on the depth chart.

Noah Brown is second among Cowboys wide receivers with 28 catches. Michael Gallup has recorded a mere 19 receptions in seven games after returning from a torn ACL he suffered a season ago. Right now, tight end Dalton Schultz is the Cowboys’ second-leading pass-catcher with 29 receptions.

At 7-3 on the season, Dallas has legitimate Super Bowl aspirations. It might simply come down to finances. If the two sides can work that out, Odell Beckham Jr. landing in Big D could very well happen here soon.