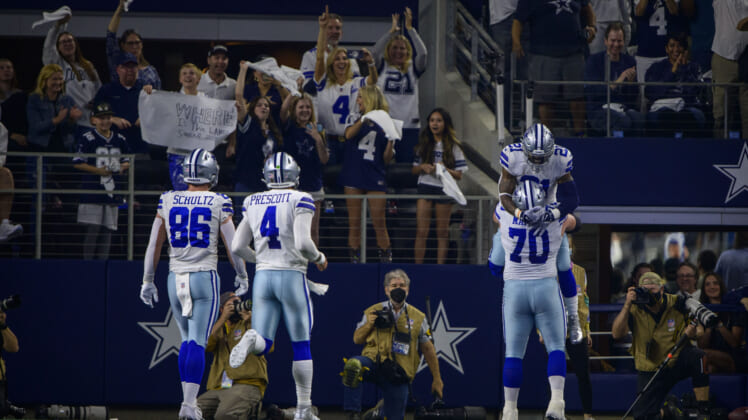 Earlier on Sunday, the Dallas Cowboys clinched the NFC East by virtue of a tiebreaker against the Philadelphia Eagles.

That wasn’t enough for Dak Prescott and Co. Taking on a desperate Washington Football Team on “Sunday Night Football,” Dallas out-classed its opponent in every possible way.

The Cowboys opened up a 21-0 lead in the first half, in large part to the performance of Trevon Diggs.

By the time the game reached halftime, Mike McCarthy and the Dallas Cowboys had opened up a whopping 42-7 lead.

It snowballed from there with Dallas eventually coming out on top by the lopsided score of 56-14.

Prescott completed 28-of-39 passes for 330 yards with four touchdowns and zero interceptions before exiting in the third quarter. Cooper Rush filled in, completing 2-of-3 passes of his own with a touchdown.

As for Washington’s offense, Taylor Heinicke completed 7-of-22 passes with two ugly interceptions — one of which was returned for a touchdown by Cowboys edge pass rusher Demarcus Lawrence.

The stats for this game were absolutely insane for a Dallas Cowboys squad that dropped 55-plus games for just the second time in franchise history. The Boys tallied 28 first downs and 497 total yards compared to 14 and 257 for WFT, respectively.

In the process, the Cowboys kept their hopes for a first-round playoff bye alive. Meanwhile, Washington was all but eliminated from playoff contention.