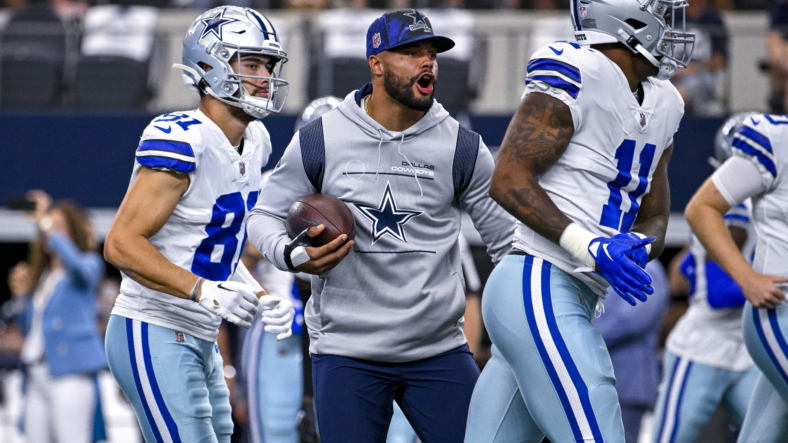 The Dallas Cowboys’ decision not to place star quarterback Dak Prescott on injured reserve after he underwent surgery on his throwing hand following Week 1 surprised many people.

When Prescott initially suffered the injury against the Tampa Bay Buccaneers, reports indicated that he could miss up to eight weeks of action. Why not save a roster spot by placing the QB on injured reserve? It would only guarantee a four-game absence under newish NFL IR rules.

We might now have an answer to that. Cowboys owner Jerry Jones took part in his weekly conversation with 105.3 The Fan on Tuesday. In said interview, the long-time owner indicated that Prescott could in fact return by Week 4 against the division-rival Washington Commanders.

“I don’t know that anybody knows [when he’ll be back]. But when he [gets enough strength in his hand], then you’ll probably see some real advancement in his timeline. I don’t know when that is. I do know that with a good airing out last week, everybody recognizes that he’ll be back sooner than later as far as the timeline. It really could be a minimum of two weeks up here in my mind. Now, that’s very optimistic.”

This would be music to the ears of Cowboys fans the world over. A lot of it will depend on how much strength Prescott is able to build up in his throwing hand. But that initial eight-week timeline now seems like eons ago.

Cooper Rush filled in this past Sunday to lead Dallas to a shocking home win over the Cincinnati Bengals. It moved the team to 1-1 on the campaign and saved what could have been a lost season given the history of 0-2 squads actually making the playoffs.

Heading into Monday night’s game against the undefeated New York Giants (imagine that), these Cowboys have to be feeling confident that they can win two consecutive games.

The question here is whether Jones and Co. will play it close to the vest with Prescott given his injury history. In Week 4, Dallas faces an average Washington Commanders team that’s coming off an ugly loss to the Detroit Lions. Perhaps, the ‘Boys believe that they can win these two games without Prescott and have him return for a huge Week 5 matchup against the defending Super Bowl champion Los Angeles Rams in Week 5.

On the other hand, there’s very little reason to believe that Prescott would re-aggravate this injury should he return before being back at 100%. It’s much different than the season-ending injury he suffered back in 2020.