Ahead of Combate Global commentary gig, Thunder Rosa says she’s down for MMA return: ‘I would love to do one more fight’

Thunder Rosa is set to make her return to Combate Global on July 15, but this time as a guest commentator. However, the current AEW women’s world champion says she is very much game for one more cage fight.

On the July 15 and 22 editions of Combate Global, the professional wrestling superstar will join the announce team of Max Bretos and Rodolfo Roman as a guest commentator. For many fans of AEW, they may not realize this is won’t be her first time working with the MMA promotion.

In an attempt to broaden her athletic horizons in 2019, Melissa Cervantes — AKA Thunder Rosa — competed in La Jaula back when the promotion was known as Combate Americas. It’s why her return to the organization this month is a homecoming of sorts. Yet, the decision-makers at Combate Global originally reached out to her about a fight instead of holding a mic.

“[Senior Vice-President Mike Afromowitz] just out of the blue texted me and he’s like, ‘would you like to fight in August?’ And I’m like, ‘absolutely not, I’m not even ready to run right now.'” Thunder Rosa told Sportsnaut with a laugh. “Then [Combate Global CEO Campbell McLaren] contacted me and [said], ‘We would like to have you, one way or another, at our show. Are you interested in doing commentary?’ So it was just about getting permission from AEW to allow me to do commentary.” 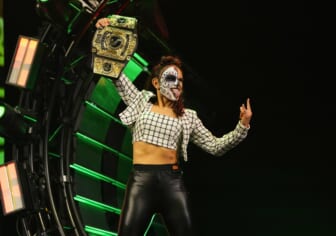 AEW has rapidly grown to become the #2 wrestling promotion in the world by being able to specifically connect with that all-important 18 to 34 audience of viewers. Combate Global has had a great deal of success by marketing MMA to a Spanish-speaking audience in the US and Latin America. Thunder Rosa sees a lot of benefits for both promotions in being the conduit to bring the AEW audience to Combate, and Spanish-speaking MMA fans to the elite wrestling promotion.

“Combate is the #1 MMA show watched by the Latino community. All over America and Latin America too,” said Thunder Rosa. “I think my mom and my dad watch my stuff in Tijuana live. So I know people are watching. They love their boxing, they love their MMA. They love action. And I always tell my friends, people like novelas and a lot of Latinos watch professional wrestling.

“They want to feel invited and I think it’s a great opportunity to invite all the Latinos to watch AEW. We have Andrade, we have Lucha Bros, Mercedes Martinez, Santana & Ortiz, and we have several people that are representatives of the Latin community,” she added. “I’m very excited that Combate Global is letting me do this and if you don’t speak English you can watch it in Espanol on Univision, and if not you can watch us on Paramount+.”

Since she is now a top star in the world of wrestling, there isn’t really a need for Thunder Rosa to return to MMA. However, the adrenaline rush of a fight is still something the AEW champion yearns for. While a second go-around may not happen anytime soon, Thunder Rosa says a return to the cage for one more fight is something she wants to do. Especially so she can do things better the second time after losing her MMA debut at Combate Americas: San Antonio three years ago.

Combate Global’s events featuring Thunder Rosa on July 15 and 22 will be broadcasted on Parmount+ and Univision at 11 PM ET.