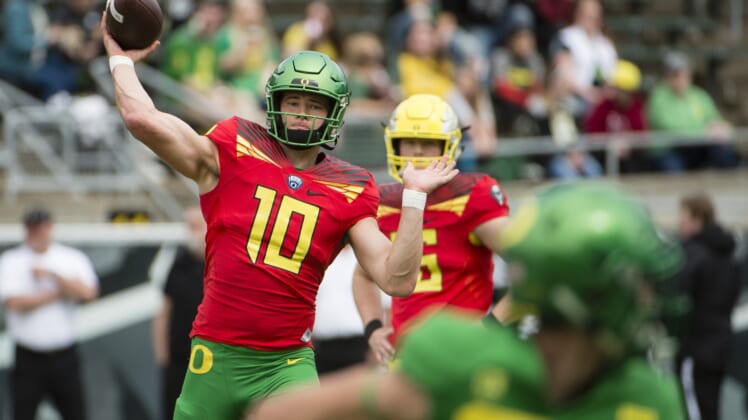 The Heisman Trophy is perhaps the most coveted individual award in sports. From the iconic Heisman pose, to the incredible ceremony in New York City and the opportunity to join rare company, the benefits are as craved as the hardware itself.

While the race for the trophy is fun to watch each year as athletes shine with jaw-dropping numbers, 2019 could be remembered for an unprecedented number of stars in college football.

The quarterback position is loaded this year with a plethora of talented players capable of posting video game numbers. Meanwhile, an exciting crop of running backs are popping up across the country seeking to put the Heisman back in the hands of a running back.

Here are the top-10 Heisman Trophy candidates for the 2019 season.

A player of Swift’s caliber would be near the top of the list just a few years ago. Things have since changed with the award going to a quarterback in eight of the last nine seasons. Even with the odds against him, Swift’s talent makes him a viable contender for the Heisman. He racked up over 1,300 total yards in a committee role last season and will now be Georgia’s featured running back. The opportunity is there for Swift to turn in a monster season. It’s just going to be tough to bring home the hardware in a crowded field.

When Herbert is in rhythm and Oregon’s offense is clicking, it’s easy to view him as a Heisman contender and talked about as a potential No. 1 pick. However, it’s the performances we saw in 2018 against San Jose State and Arizona State that are concerning. Herbert can’t afford to have even one of those games this season. The outstanding level of play from his peers simply gives no room to slip up. If Herbert wants to reach his true potential and achieve all that comes with it, he needs to clean up his game in 2019.

While Fromm might not be the most-exciting quarterback to watch in college football, his ability to routinely execute Georgia’s offense to perfection is what helps him post great numbers. The Bulldogs will ask Fromm to do even more in his junior season, which could lead to career-highs in passing touchdowns, yards and completion percentage. A total of 35-plus touchdowns, 3,000-plus passing yards and a 70% completion rate while facing SEC competition with an undefeated record would make Fromm a strong Heisman contender in 2019.

For all of the attention Trevor Lawrence gathered in 2018, Etienne’s breakout season played an equally pivotal role in Clemson’s success. After averaging 8.1 yards per carry and taking 26 trips to the end zone, Etienne might have even more in store this season. This is a player capable of rushing for 2,000-plus yards. And if he can replicate his scoring ability, he’ll have a legitimate shot at making the trip to New York City as a finalist for the Heisman Trophy.

Fields might be one of the most-volatile favorites in the early picks for the Heisman Trophy. After transferring from Georgia, he is expected to win Ohio State’s starting quarterback job and potentially be a more dynamic threat than Dwayne Haskins. It’s still asking for a lot though from a player with 39 pass attempts to his name and one who is learning his second offense in two seasons. Fields should be a Heisman candidate, but there’s also a chance that his learning curve in 2019 hinders his chances at the Heisman this year.

After his two-interception game in the opener, Ehlinger went 10 consecutive games without throwing a pick. He showed tremendous growth in his sophomore season and will enter his junior year with a chance to throw 25-plus touchdowns and rush for 12-plus scores. A 40-total touchdown season would be an outstanding start to a potential Heisman campaign. What will take that even further and perfect Ehlinger’s Heisman story is taking the Longhorns to the College Football Playoff with a shot at a title.

There is no running back who means more to his team than Taylor. He is the engine that carries Wisconsin’s offense and dictates how the team will perform each season. Now coming off a 2,000-yard season, Taylor will look to establish his dominance once again and has an excellent chance to repeat or even better his numbers from 2018. If his time on Wisconsin’s track team can make Taylor even better, he might have the best shot at snapping the streak of quarterbacks winning the Heisman.

Hurts chose the perfect landing spot to maximize his opportunity for growth and making a run at the Heisman Trophy. He’s a gifted runner and after taking significant steps forward as a passer in 2018, a summer with Oklahoma’s coaching staff should help him grow even more. A potential Heisman three-peat is on the line and Lincoln Riley will do everything in his power to put Hurts in the best position to win the Heisman and compete for a spot in the CFB Playoff.

After falling just short in the Heisman race last season, Tagovailoa returns to Alabama with the supporting cast in place to make another run at the trophy. Health will be on Tua’s side coming into the season. And if he can avoid the lingering injuries he dealt with in 2018, it will allow him to play at a level we saw glimpses of last season. 50 total touchdowns is reachable and it might just be enough to finally take home the elusive Heisman.

Lawrence took the field as a freshman, won a national championship and proved he is one of the best players in the country. Now with experience under his belt, an offseason to further develop and an even greater supporting cast, Clemson’s offense is going to reach even greater heights. Lawrence’s Tigers are favored to go undefeated this season and if he can rack up 45-plus touchdowns and limit the turnovers, then his billing as the favorite to win the Heisman Trophy will be lived up to.