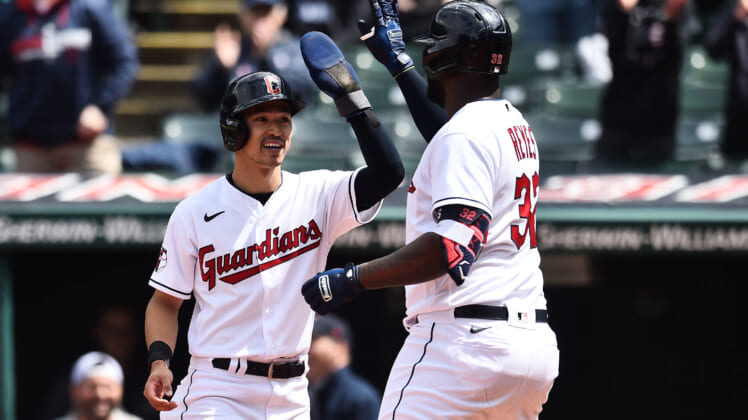 The Cleveland Guardians are trying to get back into American League contention. Cleveland made the playoffs four times from 2016-2020, the last year being their most recent inclusion in the fall festivities.

While many of the same faces remain from last season, there are two factors that can spring the Guardians back into the playoffs. The first factor is their starting rotation, which was ravaged by injuries last season, staying healthy. Manager Terry Francona’s outfield rotation, though, is the factor that decides this team’s fate.

After scoring a combined one run across their first two games, the Guardians have been raking. They’re getting runners on base and scoring runs at a high level. Cleveland’s outfielders have been the impetus for their offensive success.

Acquired from the Houston Astros in the thick of the 2021 season, Myles Straw has continually found ways to get on base. He has been a contact machine, is drawing walks and hitting .326.

Steven Kwan has been one of the developments of the young season. In his first crack at the MLB game, he owns a .511 on-base percentage. Oscar Mercado has flaunted some power while playing multiple outfield positions. All that said, can this group continue to produce?

Of course, these staggering numbers will taper off as the season progresses. That said, Cleveland needs these individuals to still be answering the bell when the dust settles. They have to be getting on base, working the count and coming through with clutch hits.

For the better part of the last two years, Cleveland has sported one of the worst offensive attacks in baseball. They’ve also had a handful of core players, but the loose ends have always come from the outfield.

Last season, the Guardians had a plausible infield and one of the best designated hitters in the sport. They still have those two assets in the present.

Jose Ramirez is one of the premier third basemen in the sport and has somehow driven in 20 runs across 11 games. Outfielder/DH Franmil Reyes is an impact power hitter from the right side. Amed Rosario has become a smooth, all-around shortstop, making a great deal of contact, wreaking havoc on the basepaths and fielding his position well. Meanwhile, infielders Owen Miller and Andres Gimenez are off to stupendous starts.

For argument’s sake, let’s say Ramirez, Reyes and Rosario hit to their career tendencies and one of Miller and Gimenez build on their hot starts: all this team needs is an above-average starting outfield to round out a top-10 offense.

Ramirez and Reyes are the team’s primary slugging threats. Rosario and theoretically one of Miller and Gimenez can set the table. Cleveland is asking its starting outfield to be the beef of its lineup. In other words, they’ll serve as the part of the order that provides support for Ramirez and Reyes.

Straw, Kwan and others can also create offense on their own when Ramirez and/or Reyes are in a slump. This will be a complementary lineup. It has a combination of power, line-drive hitting and speed. All the while, there are a lot of sound fielders in this bunch.

Cleveland has continually been one of the best teams in the sport at developing pitchers. This season is no different, as they have a compelling starting rotation with elite upside.

Shane Bieber recently won the American League Cy Young Award and is an elite strikeout pitcher. Zach Plesac is a savvy, off-speed pitcher. Aaron Civale has been able to induce weak contact and keep runners off the basepaths in previous seasons. Triston McKenzie is off to an encouraging start this season. When healthy, Cal Quantrill is a respectable starter.

Health is the one hurdle this rotation has faced, specifically last season. Working under the mindset that the bulk of their starters hold up, the Guardians have the baseline of a .500 team. Now incorporate a vastly improved offense and this is a team with a playoff destiny.

The Chicago White Sox are the team to beat in the AL Central. Fun fact: the Guardians recently finished off a three-game sweep of the White Sox. While the Minnesota Twins (vibrant offseason) and Detroit Tigers (budding roster) have reason to be enthused, the Guardians found a way to grind out 80 wins last season despite an anemic offense and injury-laden rotation.

It’s all a matter of Cleveland’s hot start at the plate being an auspicious sign of what’s to come.