Cleveland Browns star Nick Chubb, along with fellow running back Demetric Felton, tested positive for COVID-19 on Tuesday and are in jeopardy of missing Week 10 against the New England Patriots.

The Browns were already exercising precaution after fourth-string running back John Kelly landed on the COVID-19/reserve list Monday. When Cleveland tested its other running backs Tuesday, per ESPN’s Adam Schefter, Chubb and Felton were positive for having the coronavirus.

Neither player is automatically out for Sunday’s game. Under NFL rules, vaccinated players only need negative tests 34 hours apart to receive clearance to play. But if Chubb shows symptoms and doesn’t receive the green light to suit up, Cleveland could face significant problems against the Patriots.

The Browns are already without Kareem Hunt, who is on injured reserve with a calf injury. As of Tuesday morning, the only potential ballcarrier on Cleveland’s practice squad is fullback Johnny Stanton.

If Chubb isn’t cleared to play, D’Ernest Johnson would step in as the featured running back. He made one start on Oct. 21, exploding for 168 rushing yards in a 17-14 victory over the Denver Broncos. 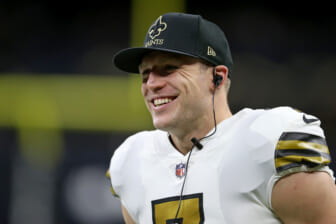