The Cleveland Browns have given five-time Pro Bowl wide receiver Jarvis Landry permission to seek out a new home after he became expendable following the team’s acquisition of Amari Cooper.

On Saturday, the Browns made a bold move and sent a fifth and sixth-round draft pick to the Dallas Cowboys for talented but sometimes inconsistent wide receiver Amari Cooper. The decision to add Cooper and the remaining three years on his contract — at $20 million per year — has made team veteran Landry nonesstential.

Following the trade, ESPN NFL Insider Adam Schefter reported that the Browns had officially given Landry and his agent the go-ahead to get on the phone and find the 29-year-old a new place to play for the 2022 season.

“On the same day they agreed to trade for WR Amari Cooper, the Browns also have granted permission to veteran WR Jarvis Landry to seek a trade, per sources,” Schefter tweeted.

If a trade partner that offers something in return that the Browns would want can’t be found, expect the team to outright cut Landry before the NFL free agent period begins on March 16. If Cleveland releases him they would save $14.8 million against this year’s cap (via NBC Sports Edge).

Landry has one year at $14.3 million left on the five-year deal he signed with the Miami Dolphins in 2018. 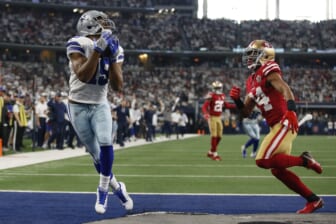 The eight-year pro had a down year in 2021, and in February Landry revealed that a “high-grade MCL sprain” suffered in Week 2 hampered him throughout the season. In 12 games he pulled in just 52 receptions, two touchdowns, and 570 receiving yards.

Landry’s numbers have seen a notable decline the last two seasons following a Pro Bowl season in 2019 when he had 1,174 yards, 83 catches, and six touchdowns.