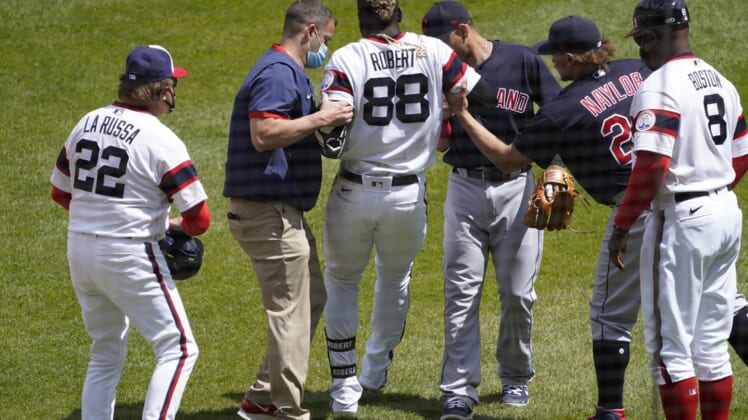 May 2, 2021; Chicago, Illinois, USA; Chicago White Sox center fielder Luis Robert (88) is helped up following an injury after beating out an infield single and had to leave the game against the Cleveland Indians during the first inning at Guaranteed Rate Field. Mandatory Credit: David Banks-USA TODAY Sports

The 23-year-old Robert sustained the injury while beating out an infield single Sunday against the Cleveland Indians. He quickly fell to the ground and needed to be helped off the field.

Robert will meet with specialists in the days ahead to determine his treatment plan, which could include surgery.

Hahn offered two other injury updates, noting that outfielder Adam Engel had a setback in his recovery from a hamstring injury and is at least three weeks out from going on a rehabilitation assignment. Hahn also said right-hander Reynaldo Lopez had surgery to correct an issue with blurred vision and could be back in 2-3 weeks.

The White Sox entered Monday with a 15-12 record, good for second place in the American League Central division behind the Kansas City Royals.