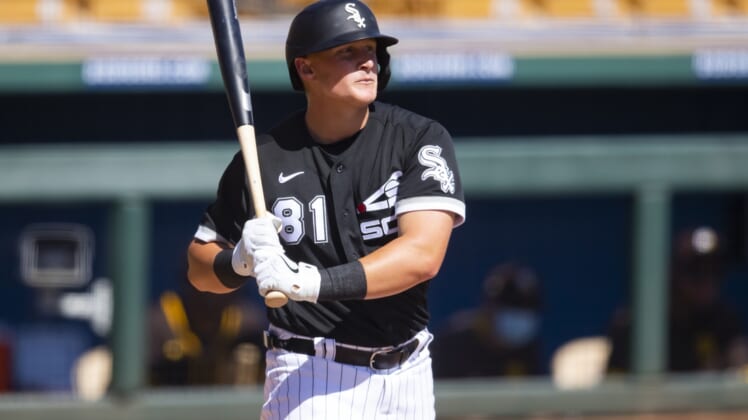 Game 2 of the season between the Los Angeles Angels and the Chicago White Sox on Friday night in Anaheim, Calif., will be a first for a prized White Sox prospect: first baseman Andrew Vaughn.

Vaughn, who will turn 23 on Saturday, is Chicago’s top-ranked prospect. He is expected to get the start in his debut, likely in left field.

Vaughn, the No. 3 overall pick in the 2019 draft, has played only one season of professional baseball — 2019 — and did not compete above high Class-A ball. That limited experience has done little to tamp down expectations about him.

He had a solid spring at the plate, hitting .279 with an .834 on-base-plus-slugging percentage, but offense isn’t Vaughn’s biggest concern. He is primarily a first baseman, but with Jose Abreu entrenched there, the White Sox had to find him another position for Vaughn.

In left field, he’ll be learning on the job.

“You got to be comfortable with being uncomfortable,” Vaughn said. “I haven’t played too much outfield in my whole life, so I just got to go out there and learn the ropes and just do my best.

“(I’ve) been working on getting jumps, learning footwork, learning how the ball travels. … Every challenge excites me because it’s that competition, you versus what you’re doing. You want to be the best at it and do the best you can.”

Vaughn will play behind Chicago starter Dallas Keuchel. The left-hander has had more success against the Angels than any other team, going 12-2 with a 3.36 ERA in 18 career games (17 starts).

Fellow lefty Andrew Heaney will be on the mound for the Angels, still trying to fulfill the promise he had when Los Angeles acquired him from Miami in a three-team trade before the 2015 season.

Heaney has had to deal with injuries and inconsistency, but every once in a while, he throws a gem. He has experienced success against the White Sox, going 3-0 with a 2.84 ERA in five career starts.

Heaney, primarily a ground-ball pitcher, does not have Andrelton Simmons behind him at shortstop anymore, but the Angels’ infield defense won’t suffer with Anthony Rendon at third base, Jose Iglesias at shortstop and David Fletcher at second.

Fletcher, who signed a five-year, $26 million contract extension Thursday, was manager Joe Maddon’s super utility man last season, playing second, shortstop, third and right field. However, he has claimed second base as his own while maintaining his spot atop the batting order.

Fletcher does not hit with much power, but he is the prototype leadoff hitter, working counts, putting the ball in play and getting on base. Last season, Fletcher was the fifth toughest to strike out in the American League, with 25 strikeouts in 230 plate appearances (10.9 percent), and he had the highest contact rate in the majors at 92 percent.

“I think people value different things,” Fletcher said. “I might not have some of the tools that other guys have that can be measured, but it’s nice to be rewarded. I just think there’s a lot of different ways to win games.