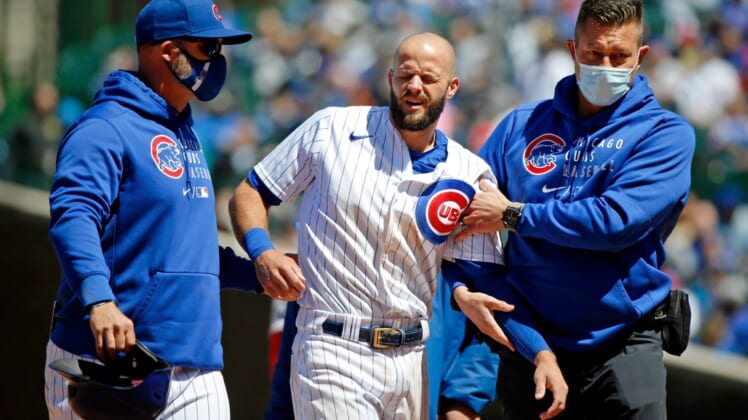 May 29, 2021; Chicago, Illinois, USA; Chicago Cubs manager David Ross (left) and trainer P.J. Mainville (right) help third baseman David Bote (13) off the field after an apparent injury as he slid into second base against the Cincinnati Reds during the fourth inning at Wrigley Field. Mandatory Credit: Jon Durr-USA TODAY Sports

The Chicago Cubs placed infielder David Bote on the injured list Sunday with a separated shoulder and purchased the contract of infielder Sergio Alcantara from Triple-A Iowa.

Right-hander Tyson Miller was designated for assignment by the Cubs to open a spot on the 40-man roster for Alcantara.

Bote injured his shoulder sliding into second base during Saturday’s 10-2 win against the visiting Cincinnati Reds.

Alcantara, selected off waivers from the Detroit Tigers in February, was batting .328 with two home runs and six RBIs in 20 games at Iowa. The 24-year-old appeared in 10 games with the Tigers last season.