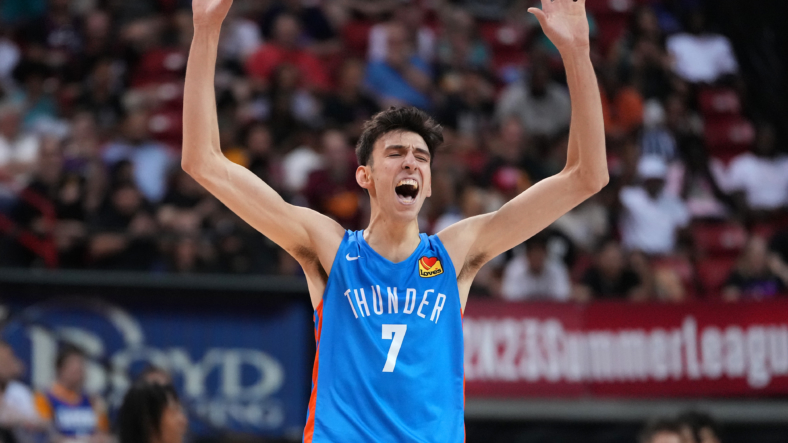 Oklahoma City Thunder center Chet Holmgren will miss the entire 2022-’23 NBA season after suffering a Lisfranc injury during a Pro-Am game in Seattle on Saturday.

Holmgren, the No. 2 pick in the 2022 NBA Draft, suffered ligament damage in his football while defending LeBron James on a fastbreak attempt during an exhibition game. While he walked off the court, the pain lingered and tests this week determined the star rookie tore ligaments in his right foot.

According to Adrian Wojnarowski of ESPN, Holmgren will miss the entire 2022-’23 NBA season to repair the Lisfranc injury he suffered in the Pro-Am game.

It’s a devastating blow for the Thunder and the highly-touted rookie. A favorite to win NBA Rookie of the Year, the 7-foot center will now spend his first year in the league recovering from a devastating foot injury.

In Holmgren’s absence, Oklahoma City will need to rely upon Darius Bazley, Jeremiah Robinson-Earl, Jaylin Williams and Aleksej Pokusevski to cover a majority of the minutes at the forward and center. For a team already expected to be in the running for a top pick in the 2023 NBA Draft, the Thunder’s odds of finishing with one of the worst records in the NBA next year have climbed significantly.

Holmgren will be eligible to compete for Rookie of the Year honors in the 2023-’24 NBA season. However, the injury will cast further doubt upon a promising talent who carried medical concerns and questions about if he had the durability to last in the league.

Paolo Banchero and Jabari Smith Jr. are both now overwhelming favorites to earn the top rookie honors this season.