The NBA play-in tournament may have had noble intentions at the outset, but the more you think about it, the easier it is to justify it going away after one year.

The NBA play-in tournament is clearly designed to squeeze out more revenue for the league while putting the players at greater risk, and potentially hampering the quality of first-round playoff matchups.

Yes, there is intrigue in Wednesday’s game between the Los Angeles Lakers and Golden State Warriors, but most people on the East Coast will have gone to sleep by the time that 10 p.m. ET tip-off occurs. Before then, we have a duel between the Memphis Grizzlies and San Antonio Spurs.

Oh wait, I know what it is: The 2021 NBA playoffs’ matchups would be absolutely fine without playing these meaningless contests. Instead, it’s created these useless, must-win scenarios for the clearly-superior teams, who will then enter Round 1 with less rest against the top seeds in their respective conferences.

If anything, it’s going to diminish the quality of first-round series rather than enhance it.

The seventh-place team hosts the eighth-place team, and the winner earns their conference’s No. 7 seed. Then, the loser faces the winner of the ninth-place vs. 10th-place game, and whoever emerges gets that last postseason berth.

Sounds kind of pointless, no? Now, if you’re going to argue that the NBA is nobly trying to create extra revenue for more franchises around the postseason, then OK. Coming out of the COVID-19 pandemic, it makes even more sense at this unique time in history.

On the other hand, provided the world returns to relative normal by next postseason, the NBA play-in tournament looks more like a gimmick that’s liable to result in an overall diminished quality of product.

MLB does something similarly stupid, only worse. They think it’s a great idea to play one hundred and sixty-two regular-season games — as if that’s not enough to determine things — and then have one-game Wild Card series shortly thereafter to see who moves on to the Division Series of the playoffs.

But to stay on topic with the less-offensive, albeit still-stomach-churning NBA when it comes to this isolated situation, let’s use the inaugural NBA play-in tournament run as a case study.

Check out the Western Conference for a moment: The Spurs’ antiquated, boring system doesn’t work in the modern NBA, hence their 10th-place showing despite being one of the most fundamentally-sound, turnover-averse teams in the game.

Meanwhile, Memphis is a nice story and has an exciting young star in Ja Morant, but they’re one of those teams that has to absolutely bring it, every single night in the regular season, just to have an outside chance at the playoffs in the Western Conference.

The Grizzlies had 72 games to prove they belonged in the top eight of the Western Conference. They didn’t get it done, and don’t deserve to have their season extended.

If the reigning champion Lakers, who were derailed by injuries because of the swift turnaround for a new season, face off with the Phoenix Suns, and the Golden State warriors take on the Utah Jazz in the first round, who’s complaining about that? 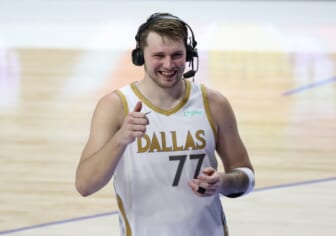 Imagine if either the Lakers or Warriors lose to the Spurs or Grizzlies in the play-in phase. After playing 72 games to show they’re superior teams.

Not only would it essentially throw out what happened during the regular season on a relative fluke amid a small sample size. It’d rob fans of better basketball, likely drive down TV ratings for the first round and beyond, and sabotage the tourney’s credibility.

And we’ve only covered the West. Imagine if the Washington Wizards’ late-season surge to earn the eighth seed gets sabotaged, and the Indiana Pacers — who’ve all but quit on their coach — or the reeling, Gordon Hayward-less Charlotte Hornets face the Philadelphia 76ers in Round 1 instead.

Gimmicky NBA play-in tournament should be abolished after 2021 playoffs

Look, the intentions were probably good from the NBA overall on this one, but it’s OK to admit defeat, even in immediate fashion.

It’s going to be utter chaos if Anthony Davis and LeBron James, the latter of whom isn’t still 100% from a high ankle sprain, get knocked out in the play-in tournament instead of playing the Suns straight away.

If the turnaround for the new NBA season wasn’t so short, AD and LeBron would’ve had better chances of staying healthy, and the Lakers may have been the No. 1 seed in the West, rather than the seventh.

LeBron might’ve put it best when he recently offered his thoughts on the play-in situation:

No one wants to see the Lakers bow out so early. They held on well enough without their two superstars to make it this far. They still earned a playoff berth in the traditional sense. Now it’s all at risk. They’re a hot shooting night from Stephen Curry and fluky upset away from seeing their title defense abruptly halted.

Speaking of which, imagine if Curry, on a torrid, one-man mission to will the Warriors to this point, doesn’t even get a proper playoff series?

All that work Westbrook and Beal put in, too, to rally the Wizards from an early hole? Potentially gone, along with any semblance of a competitive first round in the East for the Sixers or the Brooklyn Nets.

The fact that the Spurs, who finished a full six games out of eighth place, even have a shot at the playoffs is laughable.