With the 2021 NBA playoffs just about to tip off, here are five bold predictions for some major storylines that will unfold throughout the postseason.

With the 2021 NBA playoffs just about to tip off, here are five bold predictions for some major storylines that will unfold throughout the postseason.

When these two teams squared off in the Orlando bubble last year, Dallas superstar Luka Doncic was hobbled by an ankle injury, and Kristaps Porzingis was in and out of the lineup with a knee issue. The series still went six games long.

Considering the Dallas Mavericks dealt with COVID-19 throughout the season and got off to a rough start, they’ve been fighting an uphill battle all along. In the last 15 games, however, they’re sixth in the NBA with a +5.7 net rating, whereas the Los Angeles Clippers are 11th at +3.8.

Dallas’ role players are only continuing to gain confidence, and plenty of them proved capable of picking up the slack against the Clippers in 2020 even as Doncic struggled through their series and Porzingis was missing.

Kawhi Leonard and Paul George are one of the game’s premier tandems, yet their blown 3-1 lead against Denver in the second round is going to stick with them for a while. Doncic has become a much more efficient scorer, and the team around him is flat-out better than it was a season ago.

Many will likely discount the Mavs’ chances even though this is a duel between the Nos. 4 and 5 seeds in the West. Just don’t be surprised when Doncic gets Dallas through to the conference semis.

Although it’s very possible that the Golden State Warriors lose to the Los Angeles Lakers in their initial play-in tournament matchup, they should be able to knock off the winner of the Memphis-San Antonio game and salvage the West’s No. 8 seed.

That’d mean a date with the NBA-leading Utah Jazz in Round 1, or if the Dubs knock off the Lakers, they’d face the Phoenix Suns to start. This Warriors squad is heavily dependent on Stephen Curry, who’s been on an absolute tear and finished as the league’s scoring champion at 32 points per game.

It stands to reason that Golden State won’t stray from what’s been working, and feed Curry the ball as much as possible. He’s the team’s best hope at a first-round upset, and in a limited, seven-game sample size, we’re liable to see an historic volume of shot-taking and shot-making from Chef Curry.

It’s unlikely that Curry can play enough hero ball to ultimately eliminate the Jazz or Suns, yet he’s going to go down swinging. We could very well see 25 shot attempts and 15 3-pointers hoisted per game, which is plenty for Curry to get to that 40-point series average.

Top-seeded 76ers, Jazz bow out in Round 2

Earning the top playoff seed can be nice for home-court advantage. It doesn’t guarantee anything.

The Philadelphia 76ers have a new head coach in Doc Rivers who, yes, has won a championship, but also coached the aforementioned Clippers squad that blew the 3-1 lead in last year’s NBA playoffs. What have Joel Embiid and Ben Simmons ever really won together? Now they have the target on their back as the team to beat out East.

Meanwhile, the Jazz have been without their go-to No. 1 option on offense in Donovan Mitchell, who’s been set back with a high ankle sprain. That alone is enough to potentially derail Utah’s chances of a championship, much less getting out of the first two rounds.

This bold prediction is actually set up ideally for the Jazz, who in this scenario, would face the Warriors instead of the Lakers in the opening round. If LA is the opponent, and Mitchell isn’t at his best, it could get ugly in a hurry for the regular-season West winners.

Kevin Durant missed a long stretch of the season, but is now back, healthy and scoring at a supremely efficient rate.

A nagging hamstring injury has befallen an otherwise brilliant stint with the Brooklyn Nets for James Harden. Since joining Brooklyn, The Beard has been an unselfish teammate, a willing distributor and seems determined to get his first championship.

Various bouts with the media haven’t prevented Kyrie Irving from excelling on the hardwood, nor have those off-court issues been strong enough to derail this Nets squad.

So pretty much any pitfall that could’ve presented itself with this Brooklyn team happened during the regular season. Still, the Nets were just one game behind Philadelphia for the No. 1 seed.

With Durant, Harden and Irving all on the court together, and plenty of viable supporting players around them led by Blake Griffin, Brooklyn is going to put on an offensive display the likes of which has never really been seen as its Big Three steamrolls the rest of the Eastern Conference en route to an NBA Finals berth.

Some teams can’t flip the switch. We saw that with the Clippers in the bubble. This will be different. Watch. 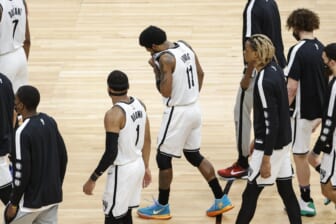 Despite the glowing forecast for the Nets from above and the fact that they’re considered the betting favorites, they’re the reigning champions happen to be peaking at the right time.

LeBron James and Anthony Davis both missed prolonged periods of time with injuries this season. It was a quick turnaround for the Purple and Gold, which ultimately caused The King and AD to get banged up.

Even if LeBron isn’t 100% and Davis’ perpetual durability concerns still abound, this Lakers team is deeper and more collectively talented than the one that won last year’s NBA Finals.

It’s easy to get caught up in recency bias with some of these teams. When it comes to the Lake Show, their five-game winning streak to end the regular season ultimately didn’t get them out of the play-in tournament, but it did build their collective morale.

No matter who Los Angeles faces in Round 1, the champs are destined to face the Jazz and Suns in some order, barring an unforeseen play-in calamity.

Utah nor Phoenix has the battle-tested core that the Lakers do, never mind the caliber of stars that LeBron and AD are. That’ll get LA to the Conference Finals, where, no matter the seeding situation, the Lakers will be the favorites.

It’s anyone’s game in the NBA Finals, but all the pressure will be on the Nets to deliver. They’re not good enough defensively to match up when all the chips are down, which means LBJ, AD and the Lakers get it done again and win the Larry O’Brien Trophy.