Buffalo Bills give Stefon Diggs a $104 million extension, 3 more moves they should make

The Buffalo Bills have agreed to terms on a $104 million extension with Pro Bowl wide receiver Stefon Diggs.

On Wednesday, ESPN NFL insider Adam Schefter was first to report that Diggs will remain in Buffalo as quarterback Josh Allen’s top target for the foreseeable future. The massive contract the team handed down could pay the 28-year-old star as much as $104 million over the next four seasons. $70 million of that haul is fully guaranteed.

The extension will be added to the two years Diggs has on his current contract. If all things work out as planned, he will remain with the team through the 2027 season and earn as much as $124.1 million over the length of the complete deal.

Since being traded to the team before the 2020 season, Diggs has been everything the Bills could have hoped for and then some. He’s ranked in the top-10 in catches, receiving yards, and touchdowns over his first two seasons in Buffalo. During that time he has pulled in 230 passes for 2,760 yards, and 18 touchdowns. Last season he had a career-best 10 TDs.

While Buffalo is one of the favorites to make it to the Super Bowl from the AFC, that doesn’t mean there aren’t more moves they can make to improve those chances. Here are three transactions that could help take the Bills to an elite level next season.

You can never have enough weapons, and after releasing a solid slot option and veteran in Cole Beasley, it might be wise for the Buffalo Bills to take Arkansas wide receiver Treylon Burks with the 25th pick in the NFL draft. Burks was outstanding for the Razorbacks in 2021, racking up 67 catches, 1,123 yards, and 11 touchdowns. 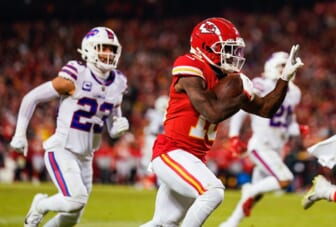 Burks has an NFL-ready frame, at 6-foot-2 and 225 pounds, great hands, and can be used in various ways on the field. Scoring is the name of the game in today’s league, and bolstering an already strong offensive unit isn’t a bad thing.

The Bills’ defense in 2021 was a solid group, however, it failed them late in the season. Especially in their historic divisional-round loss to the Kansas City Chiefs. They don’t have the type of money to go out and land top free-agent defensive backs like Tyrann Mathieu or Stephon Gillmore.

But going after a solid veteran with a nose for turnovers like Janois Jenkins would be a good addition. Not only as a player that can contribute and will come with an affordable deal, but also as another veteran presence alongside recently signed two-time champion Von Miller.

Much of Buffalo’s linebacker corp is playing on the final years of their contract. Certainly, the team will make an effort to re-sign key players, but you can’t keep them all. Planning long-term with young and affordable options would be a smart play for the team in this month’s draft. And taking a talented player like Utah’s Devin Lloyd would check off a lot of those boxes. 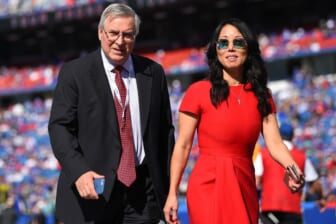 If he somehow fell to their second pick at 57 then they would have an absolute steal, but even with their first pick, he would be a worthwhile selection. Lloyd has a strong understanding of the game, makes great reads, and is a high-level athlete with sideline-to-sideline tackling abilities. He can be a building block on defense for years to come.