The New York Giants will look to win their first season opener since 2016 when they take on the Denver Broncos Sunday at MetLife Stadium.

This will be the 13th regular-season meeting between these two franchises, with each team having won six games.

Expectations for the Giants in 2021 vary widely, as some predict they’ll win the NFC East, while others believe they’ll be one of the worst teams in the league.

Their matchup with the Broncos may not be a marquee contest or a game that fans circle on the schedule. However, it will provide the perfect barometer on what to expect from Big Blue this season and here are the reasons why. 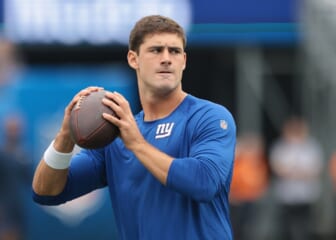 A huge test for the offensive tackles

As has been the case for several seasons, the offensive line remains a huge concern for the Giants. On Tuesday when the team released their depth chart, Andrew Thomas was listed as the starting left tackle, and Nate Solder will be the starting right tackle.

Matt Peart may split time with Solder at right tackle, but it’s never ideal to rotate your offensive linemen. That’s why the team is rolling with Solder at least for now.

The Broncos have two outstanding edge rushers in Von Miller and Bradley Chubb. How the tackles fare against Miller and Chubb will be a good barometer of what to expect this season. If Thomas and Solder can’t hold their own and keep Daniel Jones upright, expect another long and disappointing season from the offensive line.

The strength of the Giants team is the secondary which many believe can be one of the best in the NFL. New York will often use a three-safety lineup with Jabrill Peppers, Logan Ryan, and Xavier McKinney, to go along with Pro Bowl cornerback James Bradberry and Adoree’ Jackson.

Jackson’s status for the game is in question due to a sprained ankle. His presence will be sorely missed if he’s unable to play as the Broncos have several talented pass catchers in receivers Jerry Judy and Courtland Sutton, along with tight end Noah Fant.

Denver’s quarterback Teddy Bridgewater may not have a strong arm, but he’s an accurate passer that can beat you from the pocket. If Big Blue can shut down the Broncos passing game, they’ll make their first case that their secondary should be considered the best in the league.

Where does Big Blue’s D rank among the league’s elite? Check out our NFL defense rankings now

What impact will the new playmakers make this season?

Unfortunately, due to injuries, none of these new additions played in the preseason or were on the practice field together. The expectation is that Golladay, Rudolph, and Toney will make their Giants debut on Sunday. Much of Big Blue’s success in 2021 will be determined by how these new playmakers perform. 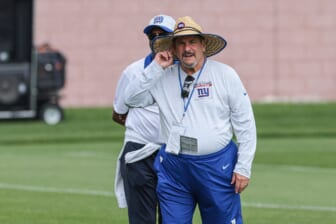 Their first test together will be a tough one as they’ll face one of the better secondaries in the NFL. The Broncos already had one of the best safeties in the league in Pro Bowler Justin Simmons, and in the offseason, they added free-agent cornerback Kyle Fuller and rookie Patrick Surtain II.

If the new Giants additions along with Sterling Shepard and Darius Slayton can have success against Denver’s secondary, there will be reasons for optimism for this season.

Can Big Blue be a playoff team?

As we mentioned earlier, expectations from this team vary widely. With ownership sick and tired of the franchise missing the playoffs in eight of the last nine seasons, 2021 is playoffs or bust for Big Blue.

In this game between two evenly matched teams, the Giants are a two-and-a-half-point home underdog. Regardless of what the oddsmakers think if New York has any hopes of making the playoffs these are the types of games they have to win. A win over Denver will give this young team confidence and momentum heading into their Week 2 Thursday night showdown against Washington.