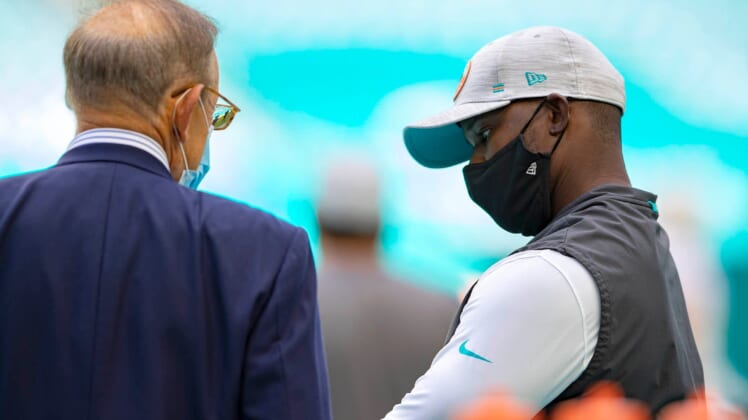 Pittsburgh Steelers defensive assistant Brian Flores has responded to the NFL’s decision to suspend Miami Dolphins owner Stephen Ross for violating of league policies regarding the integrity of the sport.

The NFL launched an investigation into Ross following Flores’ claims in a federal lawsuit, accusing the league of discriminatory hiring practices and Ross of offering bribes to lose games. Flores, fired after the 2021 NFL season, accused the Dolphins’ owner of offering him $100,000 to lose games on purpose in an effort to finish with a higher pick in the 2020 NFL Draft.

Months after launching its investigation, the NFL informed the Dolphins that it was stripped of its 2023 first-round pick and a 2024 third-round pick for tampering with Sean Payton and Tom Brady. The league also suspended Ross through Oct. 17, 2022 and fined him $1.5 million.

While the NFL investigation found multiple tampering violations “of unprecedented scope and severity”, per NFL commissioner Roger Goodell, it found different results regarding the tanking allegations. According to the NFL, there were “differing recollections” about the phrasing Ross used but it wasn’t believed he intended it as a serious offer.

Flores responded to the NFL’s decision on Tuesday, per a release from Wigdor LLP.

The NFL is evidently taking a much harsher stance on tampering than the NBA, which typically docks teams a second-round pick in a two-round draft for violations of tampering rules.

It’s a substantial penalty for the Dolphins, losing key assets that their could have been used to land a superstar quarterback next offseason or to strengthen the roster. For Ross, whose net worth is $8.2 billion, the three-month suspension and $1.5 million fine is a far lighter punishment.

Flores specifically addressed the lack of “meaningful consequences” for Ross, highlighting how the actions of the Dolphins’ owner damaged the integrity of the NFL.

“While the investigator found that the Dolphins had engaged in impermissible tampering of “unprecedented scope and severity,” Mr. Ross will avoid any meaningful consequence.  There is nothing more important when it comes to the game of football itself than the integrity of the game.  When the integrity of the game is called into question, fans suffer, and football suffers. “

Miami’s roster will certainly feel the impact of the draft-pick forfeitures for several years, making the failed pursuits of Brady and Payton even more costly. However, any notion that an NFL owner could possibly be forced to sell for greatly damaging the league’s reputation is now cast aside with Ross and Daniel Snyder providing the latest examples.