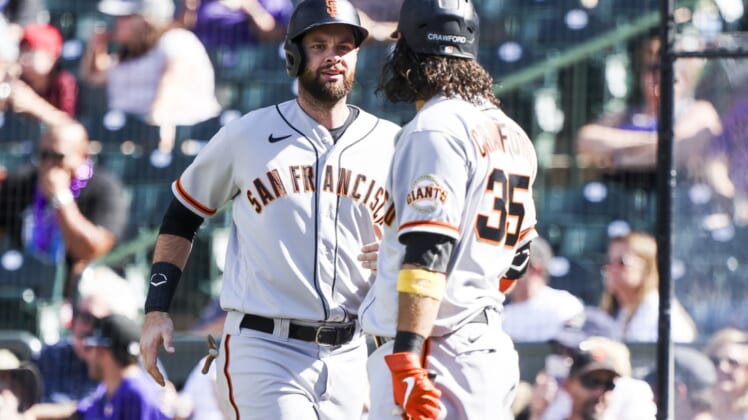 Brandon Belt, Kris Bryant and Donovan Solano had two hits each for San Francisco (102-54). The Giants have won 16 of their last 20 and head into the final week with a hold on first place in the NL West.

First baseman Brandon Belt left the game in the seventh after being hit on the left hand with a pitch.

Starter Kevin Gausman struck out 11 in six strong innings and also singled. He retired 13 straight batters at one point.

Camilo Doval (5-1) struck out all three batters he faced in the eighth to get the win.

C.J. Cron homered among his two hits for the Rockies (71-84), who lost six straight September home games to the Giants.

The Giants won it with a big ninth inning. Steven Duggar and Wilmer Flores walked off Daniel Bard (7-8) and La Stella’s pinch-hit single made it 3-2. Crawford then homered off Tyler Kinley, his 23rd, to make it a four-run game.

The Giants scratched a run across in the second. LaMonte Wade Jr. led off with a walk and Belt singled to right to put runners on first and second. Bryant hit into a forceout, moving Wade to third, and he scored on a groundout by Crawford.

San Francisco got another run in the fifth when Belt doubled and scored on Bryant’s single.

The Rockies tied it in the seventh when Cron singled and Sam Hilliard reached on an error by Flores, who had replaced Belt at first. Ryan Littell’s balk moved the runners up a base and Cron beat the throw home on a grounder by Elias Diaz.