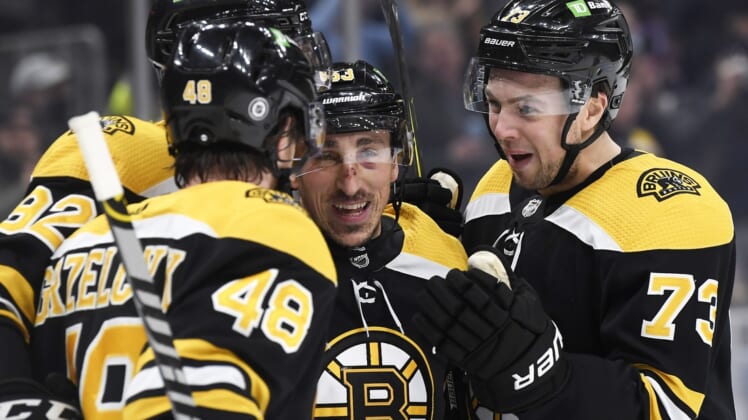 Brad Marchand recorded his fifth career hat trick to fuel the host Boston Bruins to a 5-1 victory over the Montreal Canadiens on Wednesday.

Marchand scored twice in a 15-second span during the first period before extending his franchise record with his 33rd career short-handed goal in the second. He has eight goals and an assist in his past four games, including multi-goal performances in each of his past three contests.

Curtis Lazar collected a goal and two assists and defenseman Urho Vaakanainen scored his first career NHL goal for the Bruins, who have won six of their past seven games. Patrice Bergeron contributed two assists.

Boston’s Linus Ullmark finished with 24 saves to improve to 5-0-0 in his past five starts. His lone blemish on Wednesday came when Michael Pezzetta scored from the right circle midway into the second period.

Montreal was playing its first game since New Year’s Day due to COVID-19 protocol and Canadian attendance restrictions. The Canadiens looked every bit the part of a rusty team as they yielded three first-period goals en route to losing for the 11th time in 12 games (1-9-2).

Sam Montembeault made 31 saves after replacing Jake Allen, who turned aside five of seven shots before exiting in the first period due to an apparent injury.

The teams played it close to the vest for nearly the first 15 minutes of the game before Marchand tallied twice in 15 seconds to stake Boston to a 2-0 lead. The sequence marked the fastest two goals by a Bruins player since Milan Lucic also had a pair in 15 seconds on Nov. 18, 2010.

Marchand jumped on the ice following a late line change and skated toward the right doorstep to deflect home Tomas Nosek’s shot from along the left-wing boards at 14:43.

Marchand was far from done. Craig Smith’s shot caromed off the glass behind the net and back out in front for Marchand, who swatted the loose puck past Allen.

A fortunate deflection off Lazar’s skate gave the Bruins a 3-0 lead with 50 seconds left in the first period before Marchand completed his hat trick at 7:10 of the second. Boston defenseman John Moore handcuffed Montembeault, allowing Marchand to convert the rebound for his third goal of the game and team-leading 19th of the season.

After Pezzetta got the Canadiens on the board at 10:46 of the second, Vaakanainen capped the scoring at 10:19 of the third.