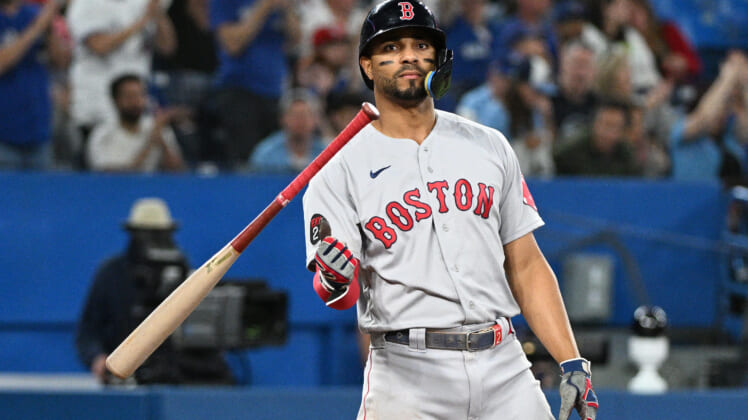 Despite having a trade market value that would mirror Juan Soto’s, the Boston Red Sox are reportedly not expected to make star shortstop Xander Bogaerts available ahead of the Aug. 2 MLB trade deadline.

The Red Sox have been terrible since July Fourth. It is strange to think of it now, but at one point this season they had one of the best records in baseball and seemed primed for a birth in the playoffs. However, injuries have ravaged the team and completely upended their post-season hopes as they have fallen to fourth place in the American League East, and are a few games out of the second Wild Card spot.

That is why many teams around the league believe Boston could be sellers over the next week. However, despite his impending free agency, don’t look for the team to try and ship off Xander Bogaerts. On Tuesday, ESPN MLB insider Jeff Passan revealed that “Rival executives anticipate that even if Boston unloads a half-dozen players, Bogaerts, the star 29-year-old shortstop, won’t be among them, even though he’s set to hit free agency this winter.”

The four-time All-Star, including in 2022, has an opt-out clause in his contract this winter that he is expected to exercise, so he can land a massive raise on the $20 million annually he was set to make until 2026. Chances are the Red Sox want to stay on good terms with their homegrown product and not entice him to leave by playing for a contender in October.

If the Boston Red Sox don’t trade Xander Bogaerts then who?

While the Red Sox aren’t expected to make the bold move of trading Bogaerts to avoid losing him for nothing in free agency, they will still have quite a few valuable chips on the roster to wheel and deal with. Earlier this week, NY Post MLB insider Jon Heyman reported that the New York Mets — among several other clubs — will be closely watching the Red Sox in the hopes that JD Martinez becomes available.

Passan suggested a name to look out for would be Nathan Eovaldi. The 2021 All-Star has had a subpar year compared to his last two seasons, but in a market that is very thin after Reds ace Luis Castillo, he could land Boston a solid return as contending teams compete to add an impact starter.

Along with Martinez and Eovaldi, the rehabbing Kike Hernandez and recently returned Michael Wacha are a couple more players the team could look to move in the next week.