The Boston Celtics have reportedly taken the lead in the Kevin Durant trade sweepstakes by default, due to the fact they can match the Brooklyn Nets’ asking price starting point of all-star talent in return.

If Durant gets traded or not has become the headline story in the NBA news cycle over the last month. Since the one-time league MVP requested his escape from New York in July, various teams have been linked to a possible deal, including the Phoenix Suns, Golden State Warriors, and Miami Heat.

However, from the start, the speculation has been that the Nets asking price is monumental. That is no shocker since Durant is one of the most talented players in league history to hit the offseason trade block. The rumors since have been that the organization seeks a horde of draft capital and players that can help them be competitive next season instead of falling back into a full rebuild.

Yet no team reportedly has come anywhere close to a possible swap despite some of the rumored organizations having players rival teams would covet. Well, a new report from The Athletic’s NBA insider Sam Amick brings a little more clarity to the asking price and explains why a rumored trade with the Celtics that included all-star Jaylen Brown is the only offer that has come close to what Brooklyn is looking for.

That revelation means Jordan Poole won’t be enough from the Warriors, and likewise, Bam Adebayo of the Heat is well short of what the Nets want in a swap return. 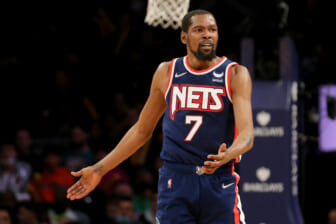 Also Read:
Kevin Durant pushes back against retirement report: ‘S**t is comical at this point’

Also of note, Amick reported that sources around the league don’t get the sense Durant could pull a similar move as Ben Simmons did in Philadelphia last year, and hold out. Which takes the pressure off the Nets to make a deal sooner to avoid some more possible drama to start 2022-2023.