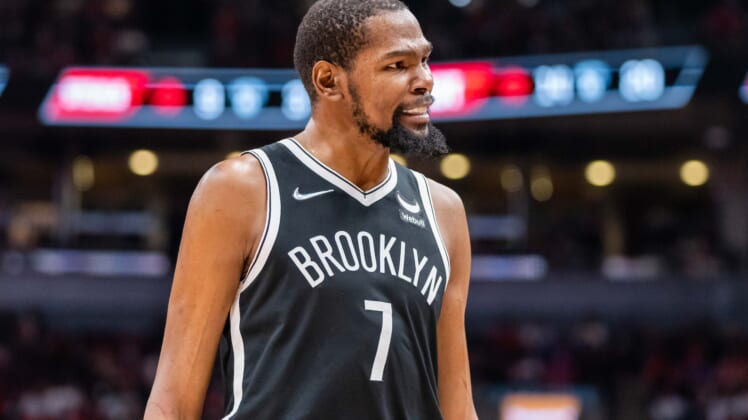 It was just last weekend when reports emerged of Kevin Durant demanding that the Brooklyn Nets either fire their head coach and general manager or trade the former MVP to a different team. Aside from Nets majority owner Joe Tsai’s response, which essentially backed Steve Nash as coach and Sean Marks as GM, we haven’t heard squat regarding a potential Durant trade.

Although we’re still months away from the start of the regular season, which gives the Nets and Durant plenty of time to reach a resolution, one NBA executive casts serious doubt on their ability to mend fences.

As Marc Stein recently laid out, there’s even a belief in some circles that Durant would much rather retire than return for another year in a Nets uniform.

As Stein mentions, the Nets are set to report to training camp for their annual Media Day on September 26, and their first practice will take place on the following day. Will Durant be there along with Kyrie Irving, Ben Simmons, and his teammates? Or will Durant soon be able to call other stars his teammates instead?

Related: Evaluating the likelihood of a Kevin Durant trade to the Boston Celtics

What will come of Kevin Durant’s trade request?

We know coming up with a fair trade for Kevin Durant isn’t an easy task. He’s one of the best players in basketball and arguably one of the greatest scorers of all time. You just don’t find 6-foot-10 basketball players with as smooth of a jump shot as KD has.

Though Durant may not have as much pull as he hoped, he’s still one of the faces of the NBA, and clearly he’s shown he’s not afraid to try and pull strings to get his way. But what happens if September nears, and there’s still no movement on the Durant trade front?

I personally don’t see how Durant’s trade value isn’t already at an all-time low. Not because his play has slipped. Not at all.

His value around the league is down, only because other teams know the Nets are dealing with a ticking time bomb. As the calendar continues to turn, the closer the season gets, the more urgency the front office will operate with, which could include reducing their asking price.

If Durant really is done with the Nets, there’s just no way they can demand top dollar as a trade return, because other teams know they don’t have a choice. It’s either trade Durant, or get into a Ben Simmons in Philly situation where he refuses to play. They can’t afford that either.

Basically, other teams around the NBA are calling Brooklyn’s bluff. They may not want to trade their best player, but it sounds as if they may not have a choice.