The moment Brooklyn Nets star Kevin Durant requested a trade, NBA teams started lining up in an effort to swing a blockbuster trade. As the 2022-’23 season draws closer and Durant gives Brooklyn an ultimatum, the Boston Celtics could be in a position to land their next superstar.

Initially, the Phoenix Suns and Miami Heat emerged as the favorites to land the future Hall of Famer. Once the Suns matched the Deandre Ayton offer sheet, the doors opened for other NBA teams to start calling the Nets’ front office. Enter the Celtics.

Boston reportedly reached out to Brooklyn about Durant, but there is conflicting information regarding the recent of those exploratory talks. However, things have taken a turn with Durant listing the Celtics and 76ers as his preferred destinations, per SNY’s Ian Begley.

Related: How a Kevin Durant trade to the Philadelphia 76ers might look

What would a Kevin Durant trade cost the Celtics?

Shams Charania of The Atheltic first reported Boston offered Jaylen Brown, Derrick White, and one first-round draft pick to Brooklyn for its All_NBA forward. However, the Nets declined and responded with a counteroffer including Marcus Smart, multiple draft picks and Jaylen Brown as the centerpieces.

When looking at Brown’s career with the Celtics, he has had nothing but a positive impact on the team. That being said, much of his success has been thanks to Jayson Tatum. Looking at career stats, Tatum has clearly had the better career thus far. Brown has stepped up his game over the last few years, but he didn’t start off his career as the rookie of the year.

With all of that said, Brown stepped up in an area that Tatum certainly lacked during the NBA Finals.

Regardless of stats, Brown was significantly better based on the eye test. It was clear that Brown was the player leading Boston, whereas Tatum often disappeared. However, Tatum is still viewed as the future of the Celtics franchise. Even so, they’d be giving up quite the player in Brown.

Not to mention the fact that they would also be giving up the 2021-’22 Defensive Player of the Year in Marcus Smart. Of course, it would also create a championship-caliber starting five with Tatum, Durant, Robert Williams, Malcolm Brogdon and Robert Williams. 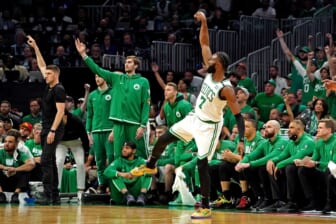 Also Read:
How the Boston Celtics offering up Jaylen Brown for Kevin Durant is dangerous

As mentioned above, the 76ers can provide legitimate competition to land Durant. One of the greatest scorers in NBA history likes the idea of playing in Philadelphia. Not only that, executive Daryl Morey provided the latest example of his willingness to make blockbuster deals with the James Harden trade.

Recently, Harden and Durant have been spotted together on multiple occasions. They were first seen at a concert together, and roughly a week later they were seen working out together in Barcelona.

There have also been reports of Durant wanting to play with Harden again. With all of this information being unloaded in such a short window, the Sixers emerged as frontrunners for a Durant trade.

The trade package that the Sixers would have to offer would be Tyrese Maxey, Tobias Harris, Matisse Thybulle, draft picks, and potentially one other player. While this offer seems like a lot, it still may not be enough. To go even further, the Sixers may not want to give this up even if it is enough.

It will likely come down to these two teams if Durant gets traded before the start of the season. Both teams have their strengths in the running for Durant, however, neither team seems like a clear fit for him. To put a percentage on the likelihood of Durant ending up in Boston, it would be just under 40%.