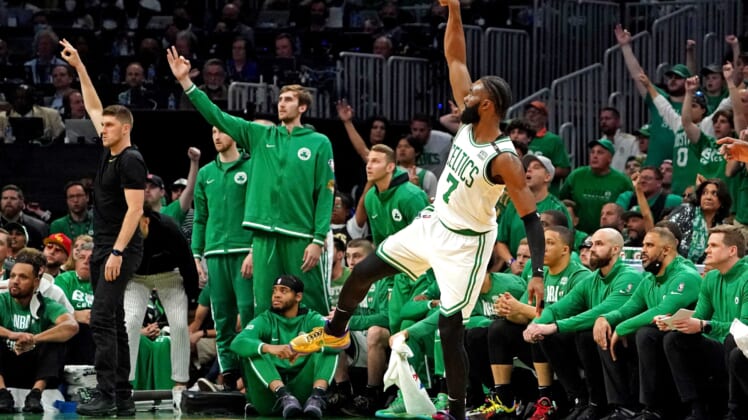 The 2022 NBA Free Agency seemed to have calmed down the past couple of weeks following the Boston Celtics, Golden State Warriors NBA Finals matchup.

With no big-time trades and signings, most fans have shifted their focus away from the league right now. Everything was quiet, and some fans returned to their natural habit of trolling other players and teams.

While in the midst of that, ESPN’s Adrian Wojnarowski decided to shake the entire league with his report regarding the Boston Celtics. If you’re thinking about Grant Williams’ exchange with Golden State Warriors’ Stephen Curry on social media, well, you’re wrong.

Early this week, the Celtics emerged as one of the teams that have been actively conversing with the Brooklyn Nets with regards to Kevin Durant. As of this writing, Boston has reportedly offered star forward Jaylen Brown for Durant.

This potential move by the Celtics doesn’t sit well with a lot of fans. After all, Brown was their leading scorer in the Finals just a few weeks ago. Both teams are just doing the business side of things to help improve their respective rosters. However, this is a risky deal and may end up hurting players involved in the rumors.

Kevin Durant is an all-time great talent. He is a rare combination of size, skill, and speed that makes him unguardable on the offensive end of the court. This is why teams are trying to get him from the Nets. His loyalty, or lack thereof, is a clear red flag for teams that are pursuing him.

If the Celtics decide to push through with this trade, they’ll be giving up on their future. And by the looks of it, Brown seems to be more devoted to the Celtics than Durant.

The 12-time All-Star would be a great addition to the squad. However, no one knows if he’d be willing to stay in Boston if the deal gets done. Who knows? Maybe after a season, he’ll decide to pack his bags and force himself out of town. It’s a great risk that the Celtics should carefully consider before they decide on something.

The Boston Celtics’ team dynamic with Jaylen Brown would be unstable

With his involvement in the trade rumors, Brown made sure that he was not on board with it. Taking to Twitter, he tweeted something which would only describe how he feels about the situation. Together with his fans, Brown has expressed his disappointment about the front office.

The Celtics making a move to get Kevin Durant was something that not a lot of fans saw coming. So far, they have made good transactions to address their depth issues. Trading for Malcolm Brogdon and signing veteran forward Danilo Gallinari were acknowledged by people as being good off-season moves.

The new developments surrounding the Durant trade saga are probably the largest off-season matter right now. Ultimately, it has involved a ton of potential trades with other teams.

The thing is, if the proposed trade concerning the All-Star phenom doesn’t happen, there is a possibility that his chemistry with the team won’t be the same.

It’s understandable if that happens. Brown has remained loyal to them since he got drafted in 2016 and has helped the team a lot. During their playoff run, he was the team’s second-leading scorer.

To add to that, the Brooklyn Nets are looking to get reigning NBA Defensive Player of the Year winner, Marcus Smart. Together with that, the Nets are also demanding multiple first-round picks in exchange for the former MVP.

Eventually, the Boston Celtics will hopefully come to their senses and stop getting involved with the Durant saga. They have an amazing roster that managed to make their way to the NBA Finals. Although they lost, at least now they know what it takes. And keeping the core together will be a better option for them.