Wild Card Weekend is in the books. The Tennessee Titans, Atlanta Falcons, Jacksonville Jaguars, and New Orleans Saints are moving on. Conversely, the Kansas Chiefs, Los Angeles Rams, Buffalo Bills, and Carolina Panthers all had their seasons come to an end over the weekend.

We have ample time to look at the four winners. But for the losers, this is the time to look back to see just what went wrong. Who were the biggest goats?

A pair of offensive-minded head coaches put together rather perplexing game plans on Saturday. The very first game of the postseason included everyone’s favorite thing, a referee controversy. One special teams ace had a nightmare performance. On Sunday, one big-name quarterback dominated while another had a game leaving much to be desired. Meanwhile, the game film will not be kind to one of the best defensive players of the last decade.

These were the biggest goats of Wild Card Weekend.

In what’s been an all too familiar theme of his career, a team coached by Reid blew a winnable playoff game. Only, this game wasn’t simply winnable. With a 21-3 lead at halftime, Reid’s team had this game won. We can never put the blame for a loss like that solely on one person — but Reid gets a lot of blame for what happened.

Primarily, it’s absolutely unfathomable that a coach could let that kind of lead slip while using a weapon like Kareem Hunt so sparingly. Hunt — who led the NFL in rushing during the regular season — carried the ball only 11 times on Saturday. Only five of those carries came in the second half. Making matters worse is that one of the team’s best weapons in the passing game, tight end Travis Kelce, missed the entire second half. With the passing attack somewhat limited, why not feed Hunt?

Four years ago, the NFL postseason got underway with Reid’s Chiefs taking on the Indianapolis Colts. Despite leading 31-10 at halftime and 38-10 in the third, Kansas City lost that game. For Chiefs’ fans, this year’s playoff opener was a far too familiar song.

While it didn’t show up on the scoreboard, the Rams controlled the early portion of Saturday’s game. The early field position battle was largely won by Los Angeles. Then, the Rams couldn’t handle a Falcons’ punt. To be fair, the ball hit Los Angeles’ Blake Countess first. Still, Cooper had a chance to bring the ball in and muffed that. The fumble set up an Atlanta field goal. Later in the first quarter, Cooper fumbled a kickoff return. That set the Falcons up with a short field, which resulted in a touchdown.

From that point, Los Angeles was down 13-0 and playing on its heels for the rest of the game. What would have happened without those turnovers? It’s impossible to say. But Cooper’s mistakes significantly contributed to 10 of those 13 points for Atlanta. After the 13-0 deficit, the Rams and Falcons played to a 13-13 tie.

Particularly with a hobbled (even if still effective) LeSean McCoy, the Buffalo offense was always going to have a hard time moving the ball on Jacksonville defense. So, we’re not getting on the Bills’ offensive coordinator simply because his team generated only three points.

No, Dennison belongs here because of how Tyrod Taylor was used. Taylor is not a drop back passer. He’s certainly not the kind of quarterback who should drop back and sling the ball from the pocket. Yet, Taylor attempted 37 passes. He also only managed seven running attempts, three fewer than Jacksonville’s Blake Bortles.

We can’t say definitively what would have happened if Taylor was allowed to move around more. But the strategy Dennison and Buffalo used was never going to be successful. 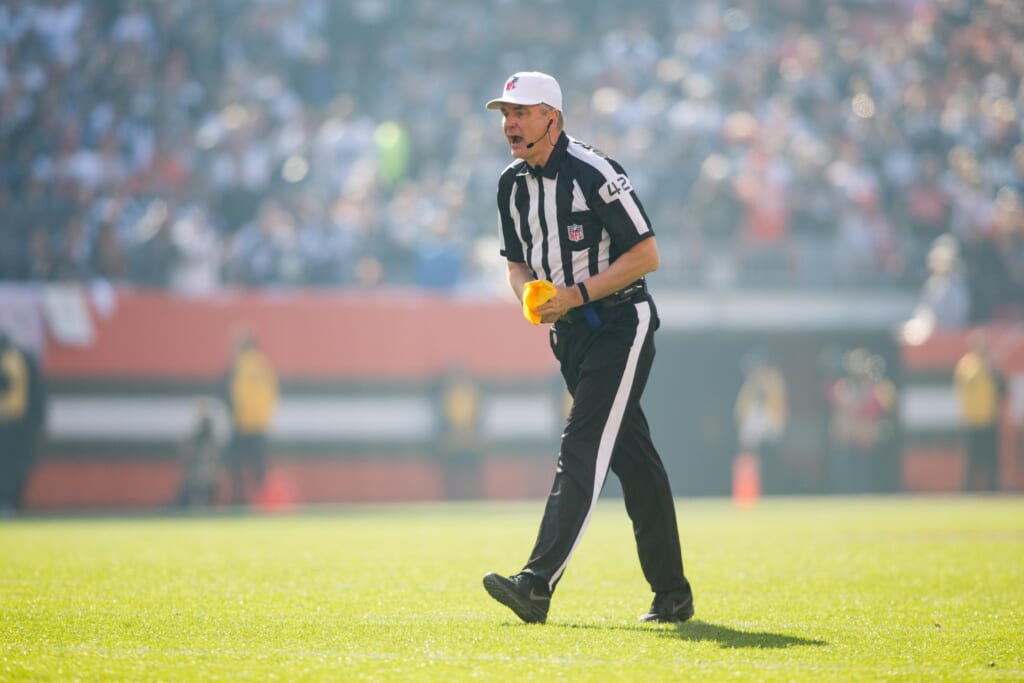 If the best thing we can say about a referee was that he was so bad that he hurt both teams evenly, he didn’t have a good day. That about sums up Triplette’s Saturday afternoon in Kansas City.

It started when Chiefs’ linebacker Derrick Johnson strip sacked Marcus Mariota on an absolutely brilliant play with the Titans deep in Kansas City territory. Triplette inexplicably ruled that Mariota’s forward progress had been stopped. Unfortunately for the Chiefs, that’s not reviewable and that drive resulted in a field goal.

On Kansas City’s ensuing possession, Kelce caught a pass, established himself as the runner, was hit (the hit that knocked him out of the game), and was ruled down by contact despite clearly losing the ball. Even with the game being in the final two minutes of the half, a review was not called for.

It seems like we get this debate every postseason. Is the current system of All-Star crews better than just the highest ranked crews sticking together? That’s a debate that can be had another time. But under the current system, it didn’t even take us one half to get a significant officiating controversy. The pending retirement of the much maligned Triplette will help, but only slightly. Things will need to get a lot better.

The microscope is strong in the playoffs. Just how strong is it? Gano made four field goals including a 58-yarder. Still, we can’t omit him here.

Gano had the chance to get the Panthers on the board first, but he missed a 26-yard kick. We don’t know if everything else would have played out the same way if the kick was good. But for a second, let’s imagine it was. Carolina’s final, unsuccessful drive would have come with the Panthers down two instead of five. Only needing a field goal would have done wonders.

The truth is, if Gano had buried the 26-yarder and missed from 58, we wouldn’t even think about including him. But that’s not what happened. This game could have had a dramatically different feel if that first kick had gone through.

Reid’s failure in Kansas City should have been a lesson to the coaches in all of the following games. Do not neglect your best player. Evidently, McVay missed that memo.

We understand that the Falcons were ahead for most of the game. But by and large, it was a competitive affair. It wasn’t until the very end that the Rams were in “must throw” mode. But Todd Gurley, arguably the most dangerous offensive player in the NFL, was given only 14 carries and 18 touches. The lack of runs was really quite perplexing. Gurley ran for 101 yards on those 14 carries. That’s better than seven yards a haul. Given how dangerous Gurley is and how good he was, he should have recorded about 10 more touches on Saturday.

McVay’s first year on the Los Angeles sidelines was a smashing success. But his first playoff game was anything but. 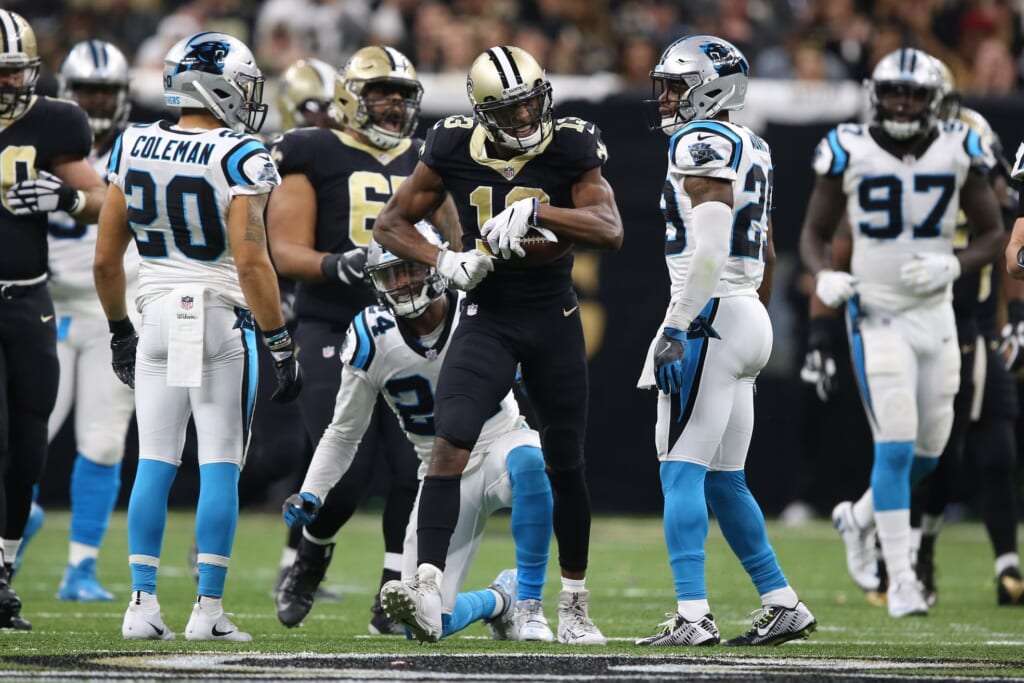 In the Saints’ two regular season wins over the Panthers, New Orleans rushed for 148 and 140 yards, respectively. Carolina seemed determined to not let that happen again. The Saints ran for only 41 yards on Sunday. That was the good news for the Panthers. The bad news is that the Carolina pass defense was helpless against Drew Brees.

Brees picked the Panthers’ apart. He finished the day 23-for-33 with 376 yards passing, two touchdowns, and a late pick (which should have been knocked down). That’s 11.4 yards per attempt. By comparison, Newton was at 8.7 yards per attempt on the day.

Stacking the box to limit the effectiveness of Alvin Kamara and Mark Ingram is not a bad strategy. But when you’re going against Brees, your secondary can’t be so exposed. When it is, we get results like what we saw on Sunday.

Revis can be spotlighted for two plays in Saturday’s game. Neither of them worked in his favor. One was a product of bad luck more than anything. The other was a complete lack of effort.

The first came in the third quarter. Tennessee scored its first touchdown of the day when Mariota completed a touchdown pass to himself. That was legal, of course, because his pass was deflected by Revis. It’s a rough critique, we know. Had the pass fallen to the ground or been intercepted, we’d be praising Revis for a great defensive effort. But we can’t judge this based on what could have or should have happened. Revis defended the pass in a way that made it possible for Mariota to catch it.

But even if we overlook that, Revis’ second bad play can’t be dismissed so easy. It came on a 22-yard run from Derrick Henry on a third-and-10, which clinched the game. One angle showed that Revis clearly had a chance to bring Henry down before the first down was gained. Only instead of accelerating towards Henry, Revis slowed down. If this happened after Henry had reached the first down, it would have been fine. Kansas City should have let him score once the first down was reached. But Revis had a chance (even if not a great one), to make a play. He went in the other direction.

Given that Revis didn’t sign with the Chiefs until late November, it’s fair to say that NFL teams weren’t exactly beating down Revis’ door. He certainly didn’t give any NFL teams anything good to look at on film.

When looking at the peripheral stats, Carolina should have won a close game. The Panthers won the yardage (413-410), first down (24-21), time of possession (33:49-26:11), and turnover (1-0) battles. But while New Orleans scored four touchdowns and kicked one field goal, Carolina found the end zone only twice and settled for four field goals on five attempts.

While Newton’s final stats were fine, he took too long to get going. When the team was in position to score, Newton was just not sharp enough.

That put the Panthers behind the 8-Ball. If just one of those early field goal attempts had been a touchdown, this could have been an entirely different game. Given his size, speed, and passing ability, Newton should be one of the league’s best red zone weapons. When his team is settling for field goals, much of the blame has to fall on him.