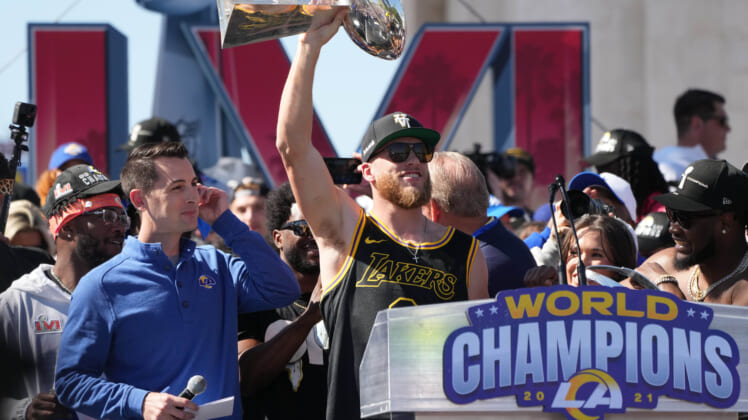 Billionaire Stan Kroenke seemed like the luckiest man in sports this year with three of his teams – Los Angeles Rams, Colorado Mammoth and Colorado Avalanche – all winning championships. It turns out that one bettor had things even better.

Before the Rams won Super Bowl LVI on Feb. 5, per David Purdom of ESPN, he took advantage of a $500 free bet offered by BetMGM. Feeling a bit risky, the sports fan bet on the Rams to hoist the Lombardi Trophy, the Golden State Warriors to win the NBA Finals and the Avalanche to win the Stanley Cup.

At the time of his bet, the odds of it happening were unfathomable at +53,800 for the parlay to hit. He needed everything to go right.

Even once the first leg fell, plenty needed to go right. Entering the NBA Playoffs as the No. 3 seed, Golden State reached the NBA Finals only to find itself down 2-1 in the series. Suddenly, the team turned things around and came out on top.

All the bettor needed was for Colorado to come through, but this incredible championship parlay nearly came crashing down. The Avalanche saw a 3-1 series lead in the second round of the NHL playoffs slip against the St. Louis Blues, arguably winning in six games only because of the Jordan Binnington injury.

The Avalanche reached the Stanley Cup Final, putting them head-to-head with the back-to-back Stanley Cup champs. While the Tampa Bay Lightning made it a series, Colorado won in six games and made one lucky bettor an even happier person than the owner with three titles this year.