The best LIV Golf players from its inaugural season in 2022

2022 brought a lot of change to the game of golf, highlighted by the introduction of LIV golf. It aimed to renovate the sport both on the course for players and fans as well as those watching away from the course.

Throughout the year, some of game’s top players and young phenoms decided to leave the PGA Tour for LIV Golf, taking a risk on their professional careers.

In its first year, LIV Golf put on eight events, as individual format ensued as well as team play. Action began in June with the first invitational in London and followed by the final event taking place in Miami a couple of months ago.

Not everyone had to commit to each tournament as there were 48 players in a field that were split up amongst 12 teams.

Sergio Garcia played in all seven events before Miami and finished the season on a high note.

In four of his final tournaments, Garcia finished inside the top-10 with a couple of fourth places in Chicago and Jeddah.

After finishing in 24th and 26th place in London and Portland, respectively, Garcia placed seventh in Bedminster, ninth in Boston, fourth in Chicago and fourth in Jeddah.

Garcia, the Fireballs GC captain, was also part of a winning squad in Bangkok as he shot 8-under. His team also finished second in Jeddah and a couple of third place finishes in Portland and Bedminster.

He finished seventh overall in Jeddah, sixth in Bedminster and third in Bangkok. Across his three rounds in Bangkok, Casey shot 15-under, highlighted by back-to-back 7-under 65s to propel him near the top of the leaderboard.

Casey played for Crushers GC and helped his team finish in second in Bangkok and in Boston.

Although Cameron Smith played in only four events before Miami, Smith was able to fit right in, especially on the course.

He kicked things off with a fifth-place finish in Boston and followed that up with an individual win in his second start in Chicago.

Through his four starts, Smith was the Punch GC captain and helped his team finished no lower than 10th.

In Miami for the championship, Smith was the driving force although he could not get on top alone. Despite shooting -7, Smith and Punch GC finished in second place.

Talor Gooch, who was the captain for Torque GC in London and also a member of 4 Aces GC, had solid 2022 campaign with LIV Golf.

In London with Torque GC, he individually finished in ninth place and his team finished in fourth.

On the season, Gooch was one of five players to accumulate at least $10 million, either through individual play or in team format.

Brooks Koepka got off to a slow start in his first few LIV Golf events. However, he turned it around late with two top-10 finishes before the finale in Miami.

Koepka, who was the captain for Smash GC since his first event in Portland, went 67-67-69 for a score of -13 and a ninth-place finish. In the next event at the Jeddah Invitational, Koepka started out hot firing a first round 62 that propelled himself to an individual title and a team victory.

In order to win the title, he had to defeat his Smash GC teammate, Peter Uihlein, with a birdie on the third playoff hole.

Charl Schwartzel got off to a great start to begin his LIV Golf career.

Schwartzel became the first individual winner of LIV Golf with a victory in London with a score of -7. Not only did he get the solo victory, but his team, Stinger GC won as well.

The individual title helped him get 40 points in the season long standings and was already in the driver’s seat for the rest of the season, as he finished in fifth place. Schwartzel finished with 66 points, the same amount as Matthew Wolff and Joaquinn Niemann.

Patrick Reed played in six events before Miami and finished higher than 20th just once. Individually, Reed ended inside the top-5 three times, highlighted by his second-place finish in Bangkok when he shot 15-under.

In addition, Reed placed third in his first LIV Golf event in Portland by shooting -9 and carded a fifth-placed finish in Bedminster.

Reed played with 4 Aces GC all season long as he did not end a tournament over par after 54 holes.

Peter Uihlein had a great first year in LIV Golf as he had three top-4 individual finishes. In the seven starts, Uihlein placed fourth in London, second in Chicago and another runner-up finish in Jeddah.

His time in Jeddah was his best three-round performance, highlighted by his second round 63 that helped him shoot 12-under par for the tournament.

Uihlein played on multiple teams throughout the season from being a captain on Crushers GC in London to playing in the Niblicks GC team in Bedminster. 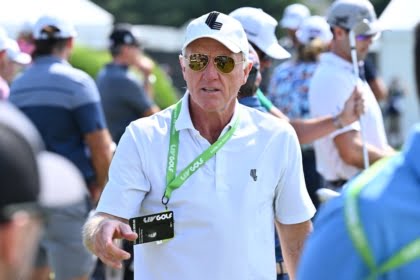 Branden Grace played in seven LIV Golf events this year and in six of the tournaments he finished, he placed 18th or lower in five of those events.

That was highlighted by taking the individual crown in the first United States event in Portland back in July.

His team, Stingers GC, started out strong to open the 2022 season as he primarily played with Charl Swartzel and captain Louis Oosthuizen. Grace helped his team win in London and finished second in Portland.

Grace then cooled off a bit but still finished inside the top 20 of his next few matches. The South African ultimately finished second after a three-way tie with Uihlein and Reed in the season long championship.

Dustin Johnson, who was one of the first big names to resign from the PGA Tour to the Saudi-backed LIV Tour, was the best player in the inaugural campaign.

Although Johnson was not an individual champion he finished inside the top 20 four times, highlighted by his third-place finish in Bangkok in October.

All of his production led him to being LIV Golf’s season-long individual champion that included a bonus of $18 million.

In team play, Johnson, who was the captain for 4 Aces GC, helped his squad earn five wins, capped off by winning the team championship in Miami.

Since the second tournament in Portland, Johnson had his team set and ready for the rest of the season as he had Reed, Gooch and Pat Perez on his side.