The second week of the NFL season delivered a wide range of performances by quarterbacks. From the stunning stat lines to the atrocious outings, Week 2 had everything.

We saw some similar storylines from Week 1 with a few quarterbacks building off their outstanding debuts with equally impressive outings this week. Of course, Week 2 also showed us quarterbacks who didn’t even look like NFL quarterbacks.

Here are the five best and worst performances from quarterbacks in Week 2.

While Manning’s final line with 33-of-44 passes completed and one touchdown are acceptable, the veteran didn’t play well against the Dallas Cowboys.

The 37-year-old remained a statue in the pocket, unable to escape pressure and extend plays when the offensive line broke down. Dallas put frequent pressure on Manning with six sacks and held him to a pedestrian 6.3 yards per pass attempt.

Manning showed signs of serious decline last year, and with his inability to extend plays, he is a poor fit behind an awful offensive line. New York’s offense is loaded with weapons but they will all be held back until New York upgrades at quarterback. 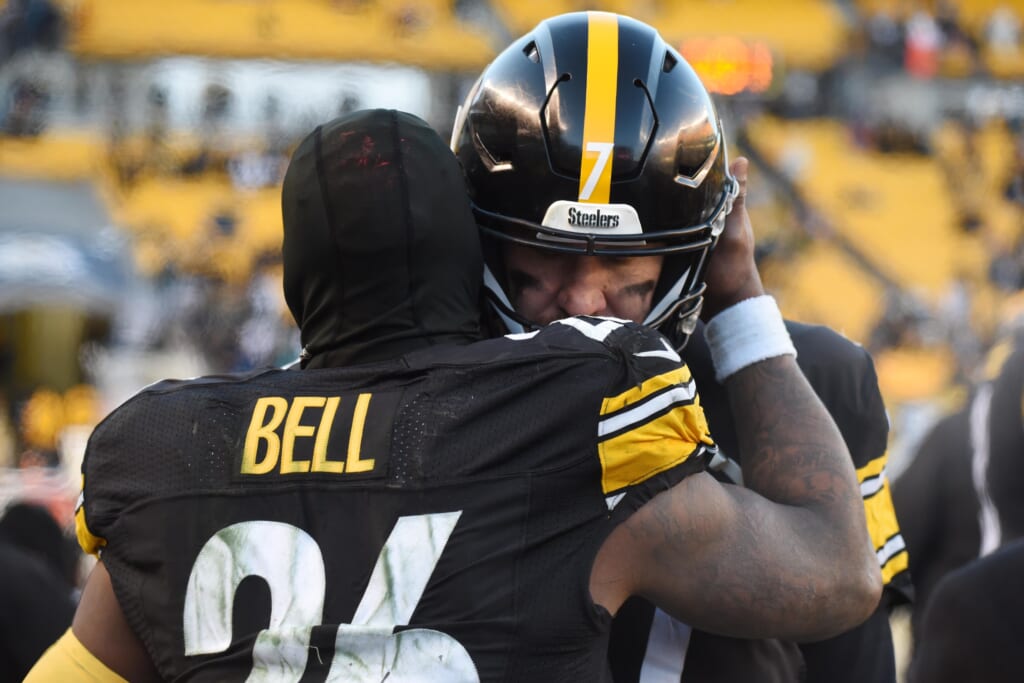 Following Roethlisberger’s miserable showing in Week 1 against the Cleveland Browns, he needed a turnaround performance to avoid some serious questions.

In Pittsburgh’s second game without Le’Veon Bell, it asked a lot more from the passing game. Roethlisberger attempted 60 passes throughout the game and threw for 452 yards with three touchdowns. He also rushed for a score.

It’s clear this offense needs Bell back — he adds a game-changing element to this offense and takes pressure off of Big Ben. Until he decides to return though, expect Roethlisberger to have plenty of 50-plus attempt games going forward with mixed results.

Flacco may have thrown for over 350 yards, but this was an ugly outing on Thursday Night Football. When Baltimore needed him to make the big throw to help it make a comeback, Flacco repeatedly fell short.

From his awful decision to throw into triple coverage that resulted in an interception to a series of ducks thrown throughout the night, it was an ugly performance to watch. Both of Flacco’s interceptions were on him, as was the game-ending fumble when he failed to get rid of the football.

Flacco may just be at the point in his career where he can only impress against bad defenses. While a few of those matchups will be scattered throughout the season, his inability to find consistent success against quality opponents could ultimately doom the Ravens.

In a game where the Vikings were gifted a shot to tie the game and then ended in a miserable tie, Cousins once again proved what he can do for this offense.

He showed off the deep ball with a beautiful strike to Stefon Diggs for a 75-yard score. Then down eight, Cousins drove Minnesota’s offense down the field and tied the game with a touchdown to Adam Thielen and two-point conversion to Diggs.

Ultimately, he finished the game with 425 passing yards, four touchdowns and one interception on 48 pass attempts. The Vikings are clearly willing to let him carry this offense, and Cousins is capable of doing just that. 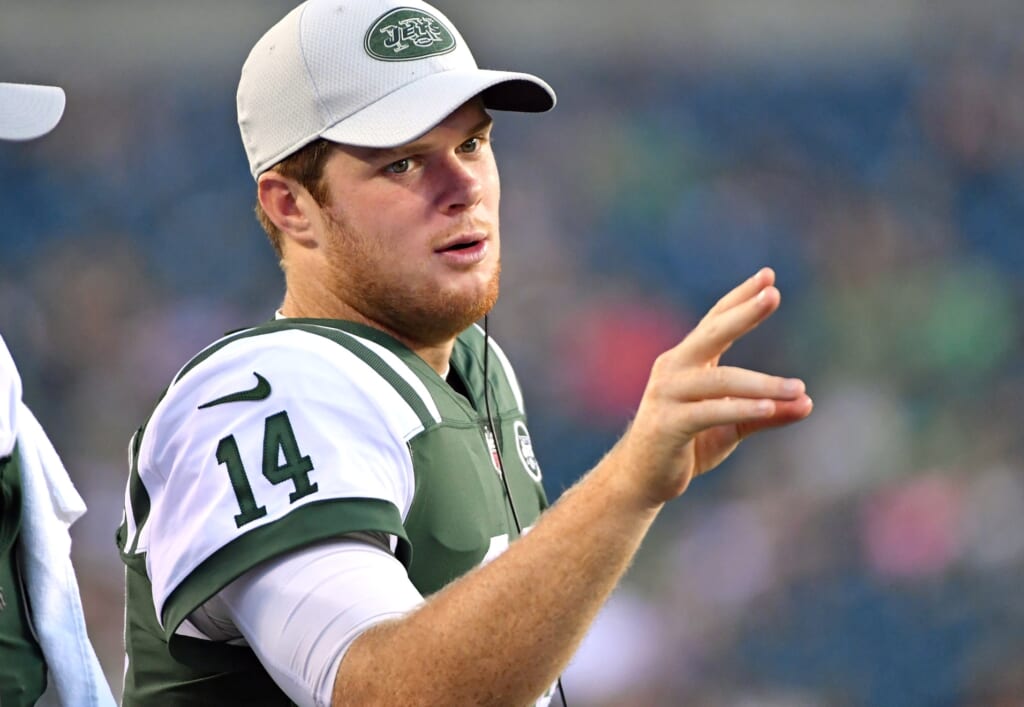 Darnold flashed plenty of promise in his NFL debut, but he also got away with a few poor throws. In a tougher matchup against the Miami Dolphins, the rookie wasn’t quite so lucky.

He finished the game with 334 passing yards, but two interceptions were major setbacks for New York. Ultimately, Darnold’s overthrow of wide receiver Quincy Enunwa in the end zone doomed the Jets the most.

This is the natural rollercoaster for a rookie quarterback. He’ll show flashes of brilliance then makes some throws that can cost his team the game. The future is still bright for Darnold. Sunday just provided him with some mistakes to learn from.

Many expected if any quarterback would shine in this game, it would be Tom Brady overpowering an outstanding Jaguars’ defense. Instead, Bortles stole the show and led Jacksonville to the victory.

We saw perfect chemistry between Bortles and receiver Keelan Cole. After Cole’s insane one-handed catch, Bortles made sure he repeatedly want back to his top receiver. The duo connected seven times for 116 yards and a score, pushing the Jaguars out to an early lead.

Bortles shined in this game and finished it with 377 passing yards and four touchdowns on 42 pass attempts. Performances like this are rare from Jacksonville’s quarterback, but they demonstrate how dangerous this team is when it happens.

The Buffalo Bills made a switch at quarterback and started rookie Josh Allen knowing he would face one of the best defenses in the AFC. Behind an inept offensive line with zero weapons to help him, this result was expected.

Allen completed just 18-of-33 pass attempts in his first NFL start and found himself under pressure constantly. The rookie threw two interceptions on the day and while he threw his first NFL touchdown, it came in the final seconds when the Los Angeles Chargers basically let it happen.

Now Buffalo must prepare for a matchup against the Minnesota Vikings, who have an elite defense and excel at putting pressure on the quarterback. Buffalo put Allen in position to fail, so that will once again be the likely outcome in Week 3. 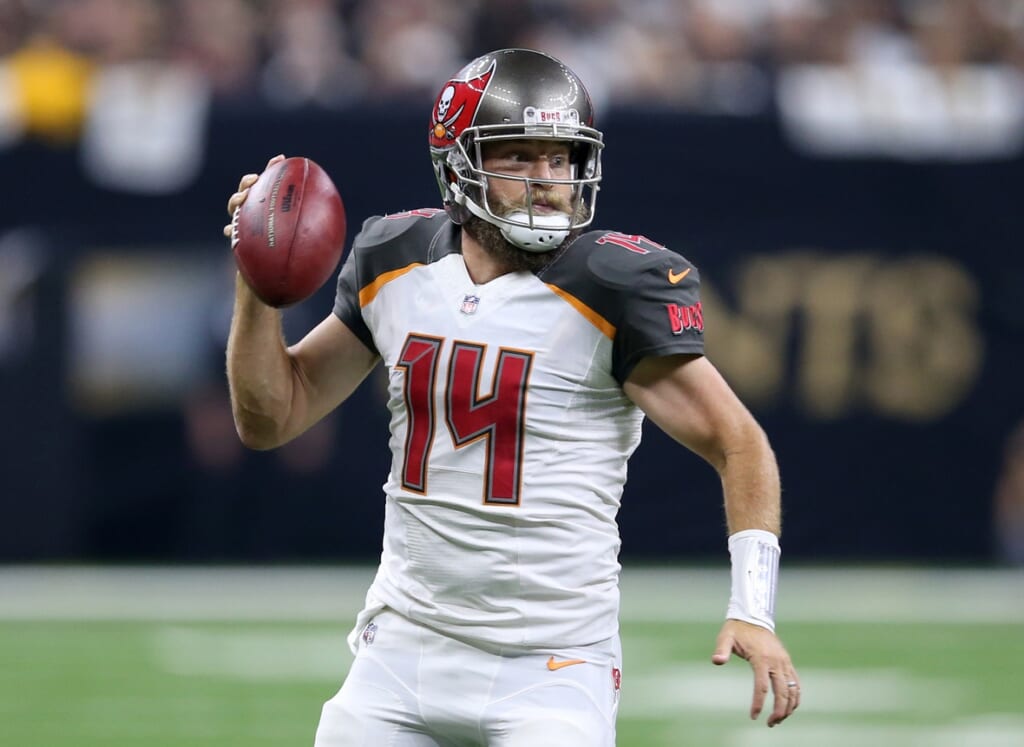 Following Ryan Fitzpatrick’s Week 1 takeover, many marveled at what the 35-year-old could do. Even after that performance, we all still doubted his ability to play well for an extended period of time.

It might be time to just accept that this is an explosive offense and the veteran’s gunslinger mentality fits it perfectly. He opened up the game with a 75-yard touchdown pass to DeSean Jackson, then hooked up with O.J. Howard for another 75-yard touchdown.

While some fingers can be pointed to a stale offense with a porous offensive line, the simple fact is Bradford looks horrible. He was awful in his debut for the Cardinals in Week 1 and managed to be even worse this week.

Even in a game where the Los Angeles Rams took an early lead and relaxed a bit late in the game, the veteran quarterback still failed to move the football. On 27 pass attempts, Bradford finished with 90 passing yards and an interception.

At this point, the only reason it makes sense for Arizona to hold rookie Josh Rosen back is to protect him from this offensive line. It may still be just a matter of time before the Cardinals make a change. 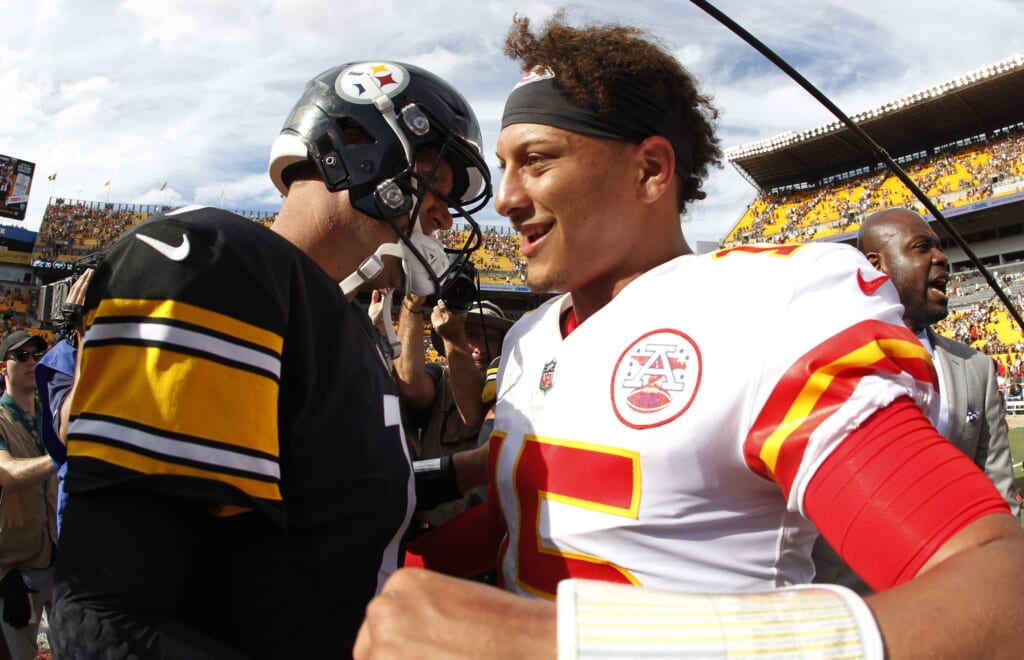 Just when we thought Mahomes’ performance from Week 1 couldn’t be top, the 22-year-old quarterback easily topped it in a huge win over the Pittsburgh Steelers.

Andy Reid’s offense fired on all cylinders in Week 2 as we saw Mahomes in rhythm on all his throws and deliver one perfect strike after another. Pittsburgh’s secondary simply couldn’t contain him and he ultimately finished with a stunning six touchdowns and zero interceptions.

Through his first two games this season, Mahomes has completed 38-of-55 pass attempts for 582 passing yards with 10 touchdowns and zero interceptions. We are seeing a unanimous MVP-caliber season unfold in front of our eyes if Kansas City’s offense stays hot.