Baseball world pays tribute to Tony Gwynn on his birthday 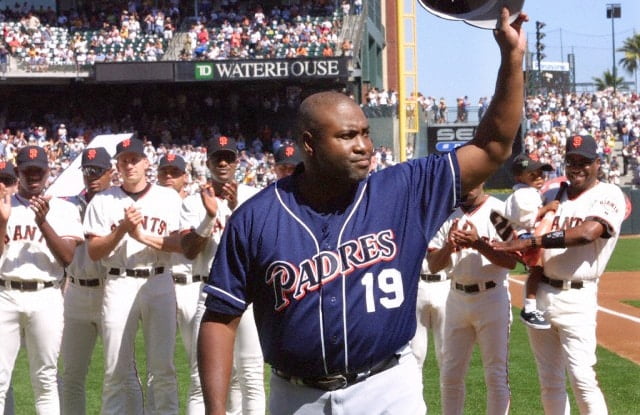 Tuesday marks the birthday of a baseball legend who left us far too soon. Tony Gwynn would have turned 58. Gwynn spent his entire career with his hometown San Diego Padres, was inducted into the Hall of Fame in 2007, and passed away at the age of 54 in 2014.

On his birthday, the baseball world paid tribute to one of the all-time greats.

Thinking of Tony Gwynn on what would’ve been his 58th birthday.

Remembering an Aztec legend in the batter’s box, in the dugout, and on the court, on what would’ve been Tony Gwynn’s 58th birthday. pic.twitter.com/drsA3c0srH

The great Tony Gwynn would have been 58 today. We miss you and thank you for the memories. #MrPadre pic.twitter.com/13N3rKUTlG

.@Padres Tony Gwynn was a generational talent. In RF, he won 5 Gold Gloves. At the plate, he recorded 3141 H. But Tony's greatest contribution to baseball was in his relentless quest to improve himself, and those around him. He would've been 58 today. https://t.co/ByGzbsjNq0 pic.twitter.com/ajMNd0zIIQ

On what would’ve been my friend Tony Gwynn’s 58th birthday, my favorite photo of him, before Game 1 of the 1998 World Series. Like the fan he was, he wanted to meet the legendary voice of Yankee Stadium, Bob Sheppard. This image was the result: pic.twitter.com/h6HhJPWWow

Tony Gwynn’s birthday is the perfect excuse for posting my favorite thing on @baseball_ref, his career numbers against Greg Maddux, Tom Glavine and John Smoltz: pic.twitter.com/FlpxYgEA80

Tony Gwynn would have turned 58 today.

Absurd. What a legend.

On Tony Gwynn’s birthday you should celebrate it by buying his hitting book for your young son/daughter. Then treat the phrase “launch angle” as the dirtiest word in your house and it’s usage is an immediate grounding.

Tony Gwynn qualified for the batting title in 14 seasons in which he had 40 or fewer strikeouts.

All active players have combined for 2 such seasons. https://t.co/5TLbWvYbmB

Gwynn certainly left us far too soon. But days like these serve as a reminder of how great Gwynn was both on and off the field.