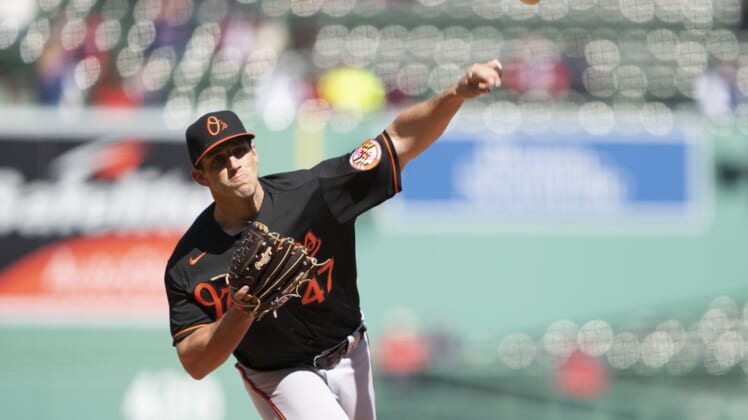 Means (1-0) struck out five and walked none in a strong 97-pitch outing that saw him throw 65 strikes. He kept the Red Sox off-balance by throwing his changeup 30 times and also threw first-pitch strikes to 18 of 21 hitters.

Ryan Mountcastle hit a two-run double in the sixth and Anthony Santander had an RBI single in the eighth for the Orioles, who also welcomed back Trey Mancini after he missed all of last season recovering from Stage Three colon cancer.

Means was in complete command while pitching in a scoreless game for five innings. The only hit he allowed was a leadoff single to Enrique Hernandez, who was subsequently picked off after the Orioles challenged the initial ruling by first base umpire Ron Kulpa.

The left-hander retired the final 18 hitters after Xander Bogaerts opened the second inning by reaching on a fielding error by third baseman Maikel Franco. He was also aided by three standout defensive plays by Rio Ruiz, who made his first career start at second base.

Ruiz made over-the-shoulder catches on Rafael Devers in the second and ended the fifth by running out even further into right field to make a similar play on Marwin Gonzalez. Ruiz also made a diving stop on a grounder by Alex Verdugo in the seventh before Means ended his outing by getting J.D. Martinez and Bogaerts.

Baltimore finally scored by stringing together a rally and getting Boston’s Nathan Eovaldi (0-1) out of the game in the sixth.

Pedro Severino started the sixth with an infield hit and Eovaldi was pulled after striking out Cedric Mullins. Matt Andriese walked Mancini and Santander reached on Hernandez’s error when a hard grounder went off the second baseman’s glove.

Mountcastle then broke the deadlock by lifting a full-count fastball off the Green Monster to make it 2-0.

Tanner Scott stranded two in a scoreless eighth by fanning Bobby Dalbec on three pitches. Cesar Valdez allowed a two-out double to Martinez in a scoreless ninth for his first save.

Eovaldi started in place of Eduardo Rodriguez (left elbow inflammation) and allowed one run on four hits in 5 1/3 innings.