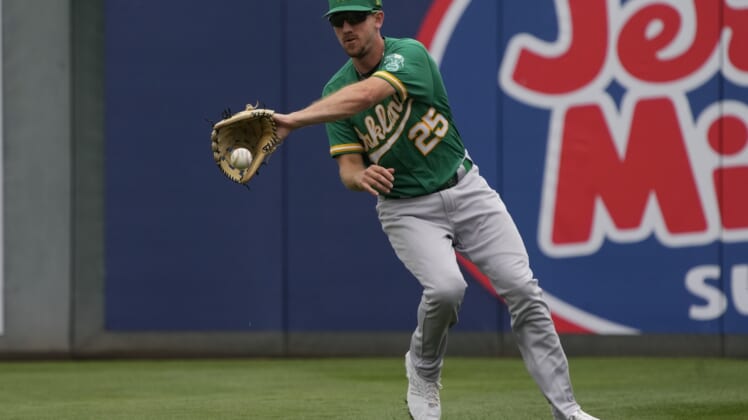 The Oakland Athletics placed outfielder Stephen Piscotty on the COVID-19 list prior to Friday night’s game against the host Toronto Blue Jays.

The Athletics also placed catcher Austin Allen along with left-handers A.J. Puk and Kirby Snead on the restricted list.

Oakland didn’t provide reasons regarding the trio, but teams are allowed to put unvaccinated players who can’t travel into Canada on the restricted list.

The Canadian government is requiring visitors to be fully vaccinated to enter the country. People are required to have received a second COVID-19 dose at least 14 days prior to entering the country.

People can enter with one dose of the Johnson & Johnson vaccine.

Athletics manager Mark Kotsay told reporters he was unable to comment on Piscotty “other than he’s just on the COVID IL.” The team didn’t reveal whether Piscotty had tested positive or not.

Kotsay did comment in general about the choice to be vaccinated.

“In terms of the vaccination, it’s obviously a personal choice,” Kotsay said, according to the San Francisco Chronicle. “You have to respect their decision and from that standpoint, they know the impact from maybe a team standpoint. But it doesn’t take away from their mentality to be a teammate.

“It’s always brought up in the beginning of the year now because we live in this world where there are certain rules and restrictions for people who are vaccinated and who aren’t.”

The Athletics also play in Toronto on Saturday and Sunday.