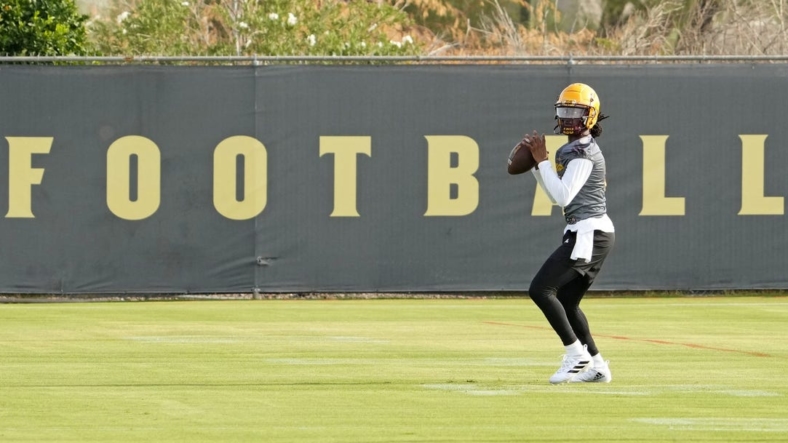 Arizona State is ready for some football.

A tumultuous offseason tested the Sun Devils, who were rocked by player and coach defections amid an NCAA investigation into potential recruiting violations.

They get back to the games on the field with the 2022 season opener Thursday at Tempe, Ariz., against Northern Arizona of the FBS.

The Lumberjacks went 5-6 last year, but notched a marquee win at Arizona for the first time since 1932. The upset-wary Sun Devils were picked to finish 10th in the preseason Pac-12 media poll.

Arizona State coach Herm Edwards begins his fifth season, having gone 25-18 and 8-5 last year. He reportedly leads off his team meetings with a reminder of the 10th-place projection as a form of motivation.

The transition of personnel has included quarterback Jayden Daniels transferring to LSU. Former defensive coordinator Antonio Pierce, one of the assistants allegedly implicated in recruiting violations during COVID-19 restrictions, is now the linebacker coach with the NFL’s Las Vegas Raiders.

An influx of 43 newcomers, including former Florida quarterback Emory Jones, are with the Sun Devils.

“Every meeting, Herm puts up the Pac-12 conference list, for who’s No. 1, who’s last,” senior fullback Case Hatch, one of the team captains, told the Arizona Republic. “We just sit there for a second and look at it. It’s just a reminder of where they have us projected and what we have to prove. The world’s against us. We’re excited to come out, starting with NAU, and show what we got on the field.”

Northern Arizona is looking to again shock an in-state school. The Lumberjacks have not defeated Arizona State in Tempe since 1937.

Northern Arizona’s head coach since 2019, Chris Ball, has a background at Arizona State from 2012-15, serving as the defensive passing game coordinator and safeties coach before being promoted to co-defensive coordinator.

The Lumberjacks also have a large contingent of players from the Phoenix area who will return to play in front of family and friends.

“We have 70 guys on our team from the state of Arizona,” Ball said. “Most of them have grown up watching the Sun Devils play. So, yeah, it’s definitely a motivating factor.”