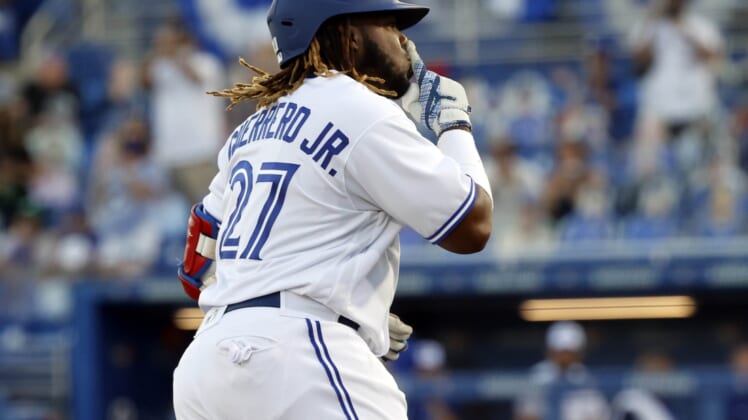 David Fletcher hit a two-run single with two out in the top of the 11th inning to give the visiting Los Angeles Angels a 7-5 victory Thursday night in the Toronto Blue Jays’ home opener at Dunedin, Fla.

Junior Guerra (2-0) pitched a perfect bottom of the 10th to get the win.

Raisel Iglesias struck out the side in the bottom of the 11th to earn his second save of the season.

Mike Trout hit a solo home run for the Angels.

Vladimir Guerrero Jr. had a home run and three RBIs and Cavan Biggio had a solo home run for Toronto.

Anthony Rendon hit an RBI single in the first after Trout had doubled.

The Blue Jays scored three runs in their first. Biggio walked with one out, moved to second on a ground out and scored on a single by Teoscar Hernandez. Guerrero followed with his second homer of the season.

The Angels tied the game in the second on doubles by Upton, Iglesias and Fletcher.

Trout hit his third homer of the season with two out in the fifth.

Biggio hit his second homer this season with one out in the bottom of the sixth. Aaron Slegers replaced Canning and allowed Bo Bichette’s infield single and stolen base followed by Guerrero’s RBI single to give Toronto a 5-4 lead.

Julian Merryweather allowed Fowler’s one-out single in the ninth. Ohtani walked with two out but Trout lined out to center. Merryweather pitched a perfect 10th.