Mar 23, 2019; Salt Lake City, UT, USA; General overall view of Wilson official NCAA basketball with the March Madness logo on the court during a second round game of the 2019 NCAA Tournament between the Baylor Bears and the Gonzaga Bulldogs at Vivint Smart Home Arena. Mandatory Credit: Kirby Lee-USA TODAY Sports

Amile Jefferson, a three-time basketball captain at Duke, is returning to the program as director of player development.

He returns to Duke in the final season of coach Mike Krzyzewski’s career and will be part of the staff as the team transitions to Jon Scheyer, already announced as the Blue Devils’ next coach.

“This is an honor to be back at Duke and I’m so grateful to Coach Krzyzewski for considering me for this opportunity,” Jefferson said. “I’d also like to thank Coach Scheyer for his help through the process and look forward to his leadership in the future. Duke has been a part of my story and my life and it’s a privilege to give back to the program and the University that has meant so much. I can’t wait to work with these guys — helping them develop, grow and learn — and be a small part of something bigger than myself.” 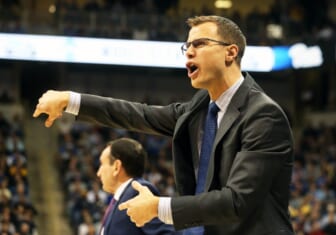 The Blue Devils also announced the promotion of RJ Hunter to director of men’s basketball operations and Zach Marcus to director of scouting and analytics.