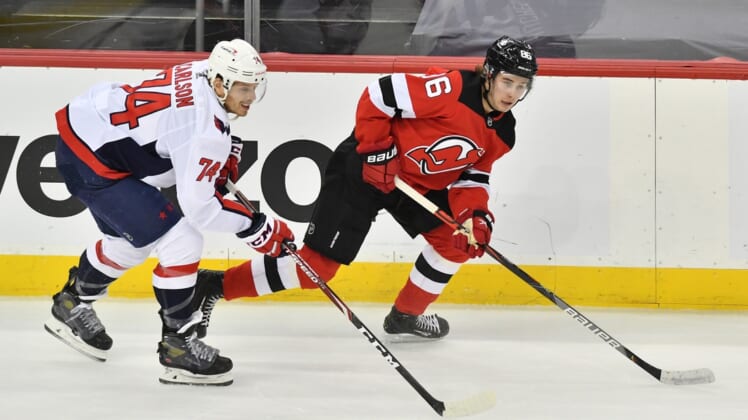 Alex Ovechkin collected another milestone goal Sunday afternoon, when he scored on the power play to cap a three-goal flurry spanning the first and second periods for the visiting Washington Capitals, who completed a season sweep of the New Jersey Devils with a 5-4 win in Newark, N.J.

The power-play goal for Ovechkin was his 265th, which ties him for second all-time with Brett Hull, nine goals behind Dave Andreychuk. It was also Ovechkin’s 725th goal, pulling him within six of Marcel Dionne for fifth all-time.

T.J. Oshie scored in the first, Conor Sheary put the Capitals ahead for good in the second and Carl Hagelin and Evgeny Kuznetsov added insurance goals early in the third for Washington, which won despite being outshot 39-19 as it broke a tie for first place in the East Division with the idle New York Islanders.

Goalie Ilya Samsonov made 35 saves for the Capitals, who finished 8-0-0 against the Devils — the most wins against an opponent without a loss in franchise history. Six of the victories were by a single goal.

Travis Zajac scored twice and Yegor Sharangovich and Jesper Bratt scored later for the Devils, who went winless (0-6-2) in eight games against an opponent for the first time. New Jersey, which began the day 11 points out of the final playoff spot in the East, played without Kyle Palmieri, who was held out for precautionary reasons. The NHL trade deadline is April 12.

Zajac put the Devils ahead 3:17 into the first before Oshie tied the game 5:59 later. Sheary received credit for the go-ahead goal when his shot glanced off Damon Severson, changed direction and fluttered past Blackwood 3:21 into the second. Ovechkin put back the rebound of a shot by Nicklas Backstrom at 8:09 before Sharangovich scored from the slot during a 4-on-4 sequence with 2:18 left in the second.

Hagelin scored a short-handed goal 2:41 into the third and Kutznetsov gave Washington a three-goal lead at 5:31 before Bratt scored off a turnover by Brenden Dillon deep in the Capitals zone with 9:45 left. Zajac scored his second goal with 4:07 remaining, and the Devils pulled Blackwood for an extra attacker with about 90 seconds left but could not get the equalizer.