Not only did the Las Vegas Raiders pull off a shock trade to land five-time Pro Bowler Davante Adams, but they will pay the wide receiver less than his former team the Green Bay Packers offered.

Despite the NCAA basketball tournament officially kicking off on Thursday night, the NFL was able to steal some headlines when the news came down that two-time All-Pro Adams was being shipped off to Las Vegas to play for the Raiders.

The trade itself wasn’t shocking since Adams and the Packers couldn’t agree to a new long-term deal after the team placed the franchise tag on him last week. However, the Raiders being the team to score his services was a surprise to many.

Since the trade was announced, reports have come out explaining that the franchise was able to get a deal done because playing for the Raiders has been a career goal for Adams. And the cherry on top was the chance to again share the same uniform with Derek Carr. His teammate at Fresno State, and a fellow Californian.

Well, adding another layer to that on Thursday night was NFL Network insider Ian Rapoport. He reported that Adams’ desire to play for the Raiders was so strong, that he turned down a bigger contract offer from the Packers to instead wear the Silver-and-Black in 2022.

“Final thought (for now) on the Davante Adams trade: His agents Frank Bauer and Kenny Chapman confirm that the Packers offered more money than the contract he’ll sign in Las Vegas. Simply, it was his lifelong dream to be with the Raiders,” Rapoport tweeted.

Along with being traded, the 29-year-old was reportedly given a new five-year deal from the Raiders worth $141.25 million. It will make him the highest paid wide receiver in the NFL. 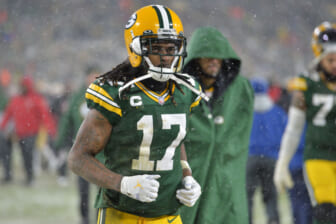