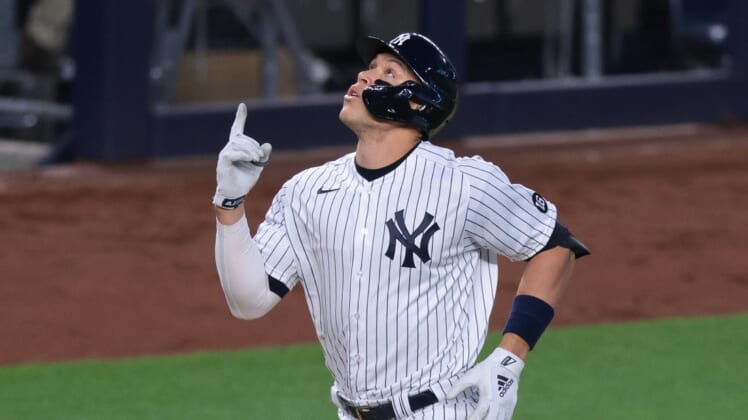 Gerrit Cole struck out 12 in six dominant innings, Aaron Judge homered in consecutive at-bats and the New York Yankees cruised to a 10-0 victory over the visiting Detroit Tigers on Friday.

Cole became the first Yankee to record at least 10 strikeouts in three consecutive games since David Cone did it from Sept. 2-13, 1998. He ended the night with 62 strikeouts, the most ever by a Yankees pitcher in April.

Judge recorded his second multi-homer game of the season and the 12th of his career after being held out of the starting lineup in the previous two games due to lower-body soreness.

Judge gave the Yankees a 3-0 lead when he opened the third by hammering a 1-1 fastball from Tarik Skubal (0-4) onto the netting above Monument Park in center field. Judge pushed the lead to 8-0 in the fourth when he hit a full-count fastball from Buck Farmer into the second deck in right field.

Judge’s second career grand slam highlighted a big power night for the Yankees, who set a season high with five homers and improved to 6-3 in their past nine games.

The Tigers lost their third straight and fell to 2-13 in their past 15 games. They arrived in the New York area after 3:00 a.m. EDT on Friday following their Thursday doubleheader with the Chicago White Sox.

Skubal allowed four runs on five hits and two walks in three innings. He struck out one.

Before the Yankees pulled away, Cole struck out nine of the first 15 hitters, including six in a row from the second through the fourth. After sitting for a while, Cole breezed through the fifth on 11 pitches, and he whiffed pinch hitter Victor Reyes in the sixth to cap his latest sharp outing.

Luis Cessa, Wandy Peralta and Lucas Luetge each pitched a scoreless inning to cap a game in which the Yankees yielded four hits and one walk while fanning 18.