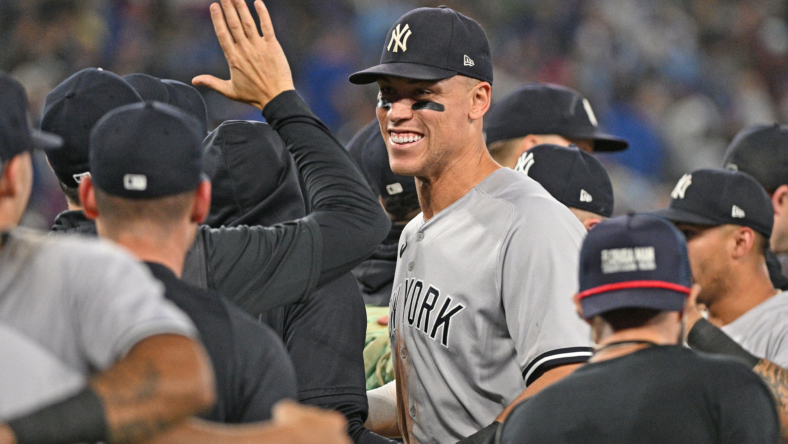 Chasing history, the Aaron Judge home run watch continues. This past Thursday saw Judge come just a few feet away from hitting his 61st home run of the season after connecting on a ball that died at the center field warning track at Yankee Stadium. The Boston Red Sox wound up walking the New York Yankees superstar three times to try and keep his power at bay. He would go hitless and struck out once in two official at-bats.

Since then, Judge has been walked a total of 10 times as teams attempted to avoid being on the wrong end of a history-making home run.

Perhaps these near misses and stolen opportunities only added fuel to the fire, as once Judge got a chance to swing on Wednesday, he didn’t miss. Judge drilled a baseball 394-feet over the left field wall off Blue Jays reliever Tim Mayza in Toronto.

His latest home run places Judge in a seventh-place tie with former Yankees legend Roger Maris. Judge was previously tied with Babe Ruth at 60, which ‘The Bambino’ did back in 1927. He’s also one away from breaking both the MLB HR and Yankees franchise record for homers. Let’s see who Judge is chasing next in his home run pursuit.

Alright, so Judge hit 61. Who’s next? In sixth place on the MLB’s all-time single-season home run leader list is none other than Slammin’ Sammy Sosa. In 1999, Sosa drilled 61 home runs for the Chicago Cubs, doing so in 712 plate appearances. Judge is now at 671 plate appearances on the season. However, Sosa did so in his age-30 season, and Judge is also 30 years old.

Judge’s Yankees have seven more games remaining on their schedule, meaning he should receive plenty more opportunities to chase Sosa. Barry Bonds and his MLB record of 73 home runs in a single season is surely out of reach, especially if Judge continues to earn first base as soon as he steps in the batter’s box.

Either way, Aaron Judge’s season has been incredible. There hasn’t been another hitter to even reach 60 home runs since 2001 when Bonds and Mark McGwire were hitting home runs seemingly every other game. Current Yankees teammate Giancarlo Stanton was the last player to come close, and he blasted 59 homers in 2017. Stanton currently has 28 round-trippers this season.