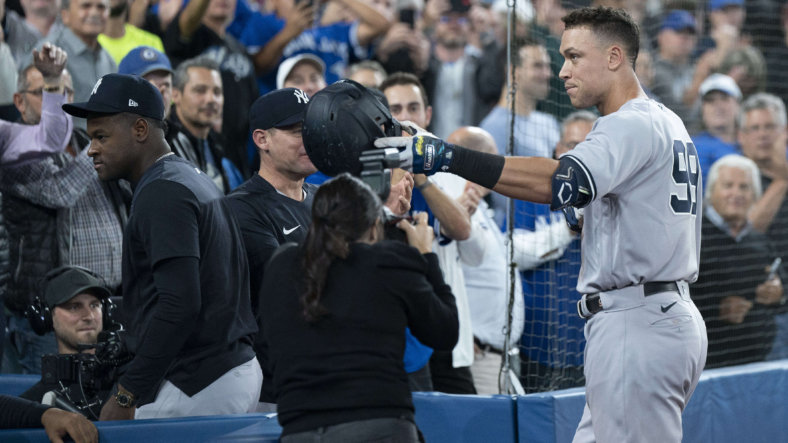 New York Yankees slugger Aaron Judge has placed himself among the best home run hitters of all time by doing something that has not been done in MLB in 21 years: Hitting 60 HRs in a single season. However, he has forever placed himself among Yankees lore on Sept. 28 when he tied the team record of 61 set by Hall-of-Famer Roger Maris in 1961.

Judge’s chase for the Yankees’ legendary record has been one of the biggest stories in baseball this season, even though the all-time mark has long been surpassed by the likes of Mark McGwire and Barry Bonds. That speaks to the brand appeal of the Yankees and the questions many have about if Bonds and McGwire had some special assistance in their journeys to single-season greatness.

With Judge now tied with Maris, let’s take a look at the MVP candidate’s historic run toward 61 home runs and beyond in 2022.

In April, New York fans knew they had an elite home run hitter on their roster but they had no idea history was about to begin. The biggest story at the time was the fact that the Yankees and Judge could not come to terms on a new long-term extension during spring training. The narrative quickly changed as the 30-year-old got off to a strong start in the opening month of the season and smacked six homers to kick off the team’s 2022 campaign.

However, the former first-round pick topped that with what would be his second-best home run month of the seeing when he sent a dozen opposing pitches over the bleachers in May. Not only did he do that, but he also drove in 25 runs and helped to push the Yankees into first place. A spot they have held onto the entire season.

By June, when Judge slammed in another 11 dingers and drove in 21 more, the Yankees fanbase and the baseball world knew at the very least that there looked to be a legitimate MVP candidate playing in the Bronx. But July told a very different and contrasting story for the center fielder and the organization. Despite having his best home run (13) and RBI (32) months of the season, the Yankees started to show signs that their dominance in 2022 was at an end as they started to slump.

In August, the squad had by far their worst showing as their once unbelievable double-digit lead in the division slipped to single-digits and all of a sudden teams like the Tampa Bay Rays were actually a threat in the AL East. Unsurprisingly, along with the Yankees’ slump in the month, Judge delivered his lowest home run total of nine. However, the one silver lining to a miserable August was the fact that Judge ended it with over 50 homers. A stat that has only been achieved 43 times and by just 27 players in MLB history.

Judge’s September to remember and reaching 60

Hitting 50 is a special number in baseball lore, but getting to 60 and above puts an athlete in a special place with the home run-hitting immortals. On Sept. 3, Aaron Judge entered the team’s matchup with the second-place Rays with 51 slams. He added to the number when he deposited a 100 MPH pitch over 392 feet into the Yankee stadium stands in the team’s 2-1 loss. Let’s take a look at Judge’s historic pace at that moment compared to other MLB legends at that point of the season.

The 6-foot-7 slugger would hit home runs in the next three games — including a 450-foot bomb — to reach 55 HRs through 136 games. The total had well surpassed his previous career high of 52 that he hit in his sophomore season in 2017, which was also the first year he earned All-Star honors.

However, that wild power surge would be followed by a lull of four games where he hit no home runs. That quiet spell ended when he added to his total and closed in on Roger Maris as he took pitches deep in consecutive games to reach 57 home runs by 142. An impressive number that outpaced Maris by two and Yankees icon Babe Ruth’s 1927 season but five. However, it put him well behind Bonds and McGwire’s 60 that each had through that many games.

On Sept. 18, Judge would close in on the magical 60 when he hit home runs 58 and 59 on the same night where he also knocked in four RBIs.

Two days later, Judge joined the immortals of baseball by becoming the third fastest player to his 60 home runs in a season when he took a pitch from Pittsburgh Pirates reliever Wil Crowe to left field to reach 60 in the team’s comeback win that evening. It is an amount only five other players in baseball history have ever reached and took him to within one homer of the Yankees team record.

Heading into the Yankees’ matchup with the Toronto Blue Jays on Wednesday, Judge needed just one more shot to the outfield stands to tie Maris. He finally achieved what no other Yankees player has and tied the legendary team record.

Judge has five more games left to now become the all-time team leader and is on pace to hit 62 homers. Which would land him at fourth all-time in a tie with Chicago Cubs great Sammy Sosa. At this rate, Judge will also come up well short of Barry Bonds’ record of 73 that he put up in the same season as Sosa’s 66 in 2001.